People with monkeypox can spread the virus up to four days before symptoms appear, with more than half of transmissions potentially taking place during this period, a UK study has estimated. 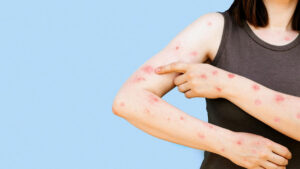 While the findings have yet to be confirmed, they suggest that many monkeypox infections cannot be prevented by asking patients to isolate once they realise they have the virus, the study said.

Since May, when the virus suddenly started spreading beyond the West African countries where it has long been endemic, monkeypox has killed 36 people out of more than 77,000 cases, according to the World Health Organisation.

However, case numbers have steadily fallen since peaking in July, particularly in Europe and North America, the hardest hit areas in the early stages of the global outbreak.

The new study published in the journal BMJ was carried out in Britain, the first nation to detect a cluster of cases outside of Africa in May.

Researchers from the UK Health Security Agency looked at contract tracing data and questionnaires for 2,746 people who tested positive for monkeypox in the country between May and August.

Some 95 percent of the participants were men who have sex with men, a community that has been overwhelmingly affected by the global outbreak.

Analysing the data using two different statistical models, the researchers found that it took an average of nearly eight days for symptoms to appear after a patient was exposed.

That period was more commonly longer than the time between when the first patient and their contact case showed symptoms, which is called the serial interval.

“The median serial interval was estimated to be shorter than the incubation period, which indicates considerably greater pre-symptomatic transmission than previously thought,” the study said.

Fifty-three percent of the cases were transmitted before the person had any monkeypox symptoms, the study estimated.

The transmission was detected a maximum of four days before symptoms set in, it added.

Boghuma Kabisen Titanji, a virus expert at Emory University in the United States who was not involved in the study, said the “robust analysis” was “interesting and convincing”.

“This needs confirmation by more studies but has implications for vaccination-based disease elimination strategies which should be seriously considered,” she said.