Ship Classification Societies set the technical and operational standards for different kinds of ships, carriers and offshore structures concerning their design, construction, surveying and testing, after which the vessels are given a class certificate. 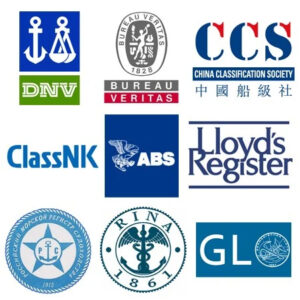 They are of immense importance for the maritime industry since they offer yardsticks for naval safety regulations and comparison of marine structures based on their respected and technologically advanced features, aiding in tracking the technological innovations in the maritime sector. Classification societies also help determine whether ecological and environmental considerations have been considered and reflected in the ship’s essential features.

Ship Classification is an essential requirement, as it offers information on the structure’s functions, such as the propulsion or steering systems and their reliability for facilitating maritime services on board. If a vessel is built upon the rules of classification societies, that vessel must have a class certificate. However, if ships are constructed according to the standards of the flag nation, then a certificate of a class is not a requirement.

In this article, let us look at some of the world’s biggest and most prominent classification societies.

Det Norske Veritas, earlier known as the DNV GL, is the largest classification society in the world. It was founded in 2013 after two prominent classification societies, namely the Det Norske Veritas, based in Norway and the Germanischer Lloyd, headquartered in Germany, were merged into one entity. In 2021, DNV GL shed its last name and was renamed DNV while it continued with its older organisational and functional structure. It has set specific standards for ships and offshore vessels known as class rules.

DNV functions in more than 100 nations, employing more than 13,000 people from different cultures and nationalities and has more than 350 administrative offices spread across the globe. This organisation offers various services to numerous industries apart from the maritime sector. It has a prominent presence in oil and natural gas, innovations and research developments in renewable energy systems, modern electricity solutions, and the health sector.

This classification society offers services to more than 14,000 vessels and offshore structures worth 265 million tonnes, representing 21% of the global market share. The organisation’s history can be traced to as early as 1864, when it was founded in Oslo, Norway, to check the operating conditions of Norwegian commercial ships. Since then, it has grown significantly by providing testing, class certification of vessels, offshore units, and technical services.

Founded in 1899, Nippon Kaiji Kyokai is a classification society in the shipping industry, also popularly known as ClassNK or just NK. It is a non-profitable and non-governmental body that aims to secure human life and property in the oceans and safeguard the well-being of the marine ecosystem.

It is headquartered in Tokyo, Japan, with numerous offices situated in big cities in Japan and across the world. According to reports, in December 2021, NK possessed 9,124 vessels amounting to more than 267 million gross tonnes underclass, representative of 20% of the global merchant ships presently categorised underclass.

It has a global presence through an expansive network of surveying officials working in shipbuilding and repair units at all major port facilities. Hence, the societies’ services are available in all major ports. The community has around 130 administrative offices that conduct surveys to oversee compliance with society’s rules by all ships and offshore units. Structural features such as hull type, propulsion and electric functions, and nautical gear come under its regulations.

ClassNK is authorised by more than 100 nations, offers numerous services to the maritime sector, including environmental and safety systems, and undertakes technical and research programmes. It also operates in other spheres and provides services to diverse clients, including administrations, technical operations for offshore units, engineering solutions etc.