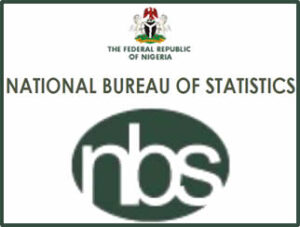 The NBS said this on Sunday in Abuja in its “Foreign Trade in Goods Statistics, Q2, 2021”, adding that the increase was a result of the sharp increase in export value during the quarter under review.

It said that crude oil, which was the major component of export trade, stood at N4.07 trillion or 80.29 per cent of total export.

“This further shows a sharp increase of 111.32 per cent in crude oil value in Q2 compared to N1.92 trillion recorded in Q1, while the non-crude oil export recorded N1 trillion or 19.71 per cent of total export trade in Q2.”

In its products classification by sectors, the NBS said that total value of trade in agricultural goods in Q2 stood at N817.35 billion, with the export component totaling N165.27 billion while the import was valued at N652.08 billion.

It added that top most of these exported agricultural products were good fermented Nigerian Cocoa beans exported mainly to Netherlands (N16.48 billion), Malaysia (N9.32 billion) and the United States of America (N8.41 billion).

The NBS said that the total value of trade in solid mineral goods in Q2, stood at N63.68 billion, with the export component of at N14.93 billion while import was valued at N48.75 billion.

According to it, the leading exported mineral products were cement exported to Niger Republic and Togo in values worth N3.12 billion and N2.32billion.

For the manufactured goods sector, the value of trade stood at N4.51 trillion representing 37.50 per cent of total trade.

It said that out of the figure, the export component accounted for N211.67 billion while the import component was valued at N4.29 trillion.

“The products that drove up manufactured products were vessels and other floating structures for breaking up, which was exported to Cameroon in the value worth N71.90 billion.

“Vessels and other floating structures for breaking up were also exported to Spain and Equatorial Guinea in values worth N18.34 billion and N6.26 billion.

“In terms of manufactured imports, used vehicles were mainly imported from United States and Italy in values worth N33.78 billion and N5.74 billion.”

The report said that import trade classified by region showed Asia as the leading partner with a record of N3.46 trillion or 49.92 per cent with Europe with N2.30 trillion or 33.16 per cent closely following.

It added that out of the value recorded for Africa, import from ECOWAS countries accounted for N24.2 billion.

It said that in its analysis of imports by country of origin, data showed that the majority of the goods imported during the quarter originated from China with value of N2.078 trillion, followed by India with N570.01 billion, Netherlands N557.16 billion, United States N526.92 billion.

The NBS said that export by section revealed that mineral products accounted for N4.63 trillion or 91.29 per cent of total export trade.

“This was followed by vehicles, aircraft and parts, vessels at N141.73 billion, vegetable products N92.80 billion among others.