A retired Director at the Nigerian Maritime Administration and Safety Agency (NIMASA) Hajia Lami Tumaka has charged women in the maritime industry to build capacity in their chosen careers, for them to qualify and take available opportunities. 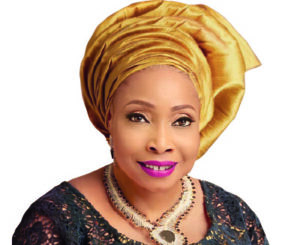 Tumaka, while speaking during the Chartered Institute of Transport Administration (CIoTA) Nigeria, celebration of the inaugural International Day for Women in Maritime initiated by the International Maritime Organisation (IMO) last week in Lagos spoke on the need for training as a fundamental tool for development while women seek for visibility and recognition.

The theme of the IMO day for women is: “Training, Visibility, Recognition And Supporting A Barrier-Free Work Environment”.

She said although the maritime industry is male-dominated, despite that, she said there are women in the industry who are performing well, while urging the women to get trained and be retrained, to make themselves well educated in order to get the visibility that they deserve.

She said, “the world needs to see that women are doing very well, and their efforts should be crowned with recognition and awards.

Speaking further she said: “Out of the 409 members of the National Assembly, only 19 are women, which is about 4%, even though 75percent of the Nigerian population is constituted of women and youths.

“The National Assembly threw out five Bills until they were prevailed upon to bring them back.

“We all know that the maritime industry is male-dominated, despite that, there are women in the industry that are performing well, but with this theme, what it means is that women should be trained and retrained, to make them well educated and give them the visibility that they deserve.

“The world needs to see that women are doing very well, and their efforts should be crowned with recognition and awards.

“In the sports world, you would find out that in terms of payments, there is a wide gap between the men and the women.

For some reason, I don’t know why female police officers cannot have children for a certain length of time, but it is different for men, this is gender disparity.

“In the maritime industry, the narrative has to be changed by creating opportunities for the women because there are roles they can play in the sector

“Training is critical for women to take up higher responsibility in the maritime field. Nobody will give you a seat because you are a woman; you have to build your capacity and show that you can be there and play at the highest level. That is what the theme for this year’s international day for women in maritime is about.

“While we know we are not yet where we should be, but we can get there, there are various women who have been outstanding and have distinguished themselves. The likes of Mrs Mfon Usoro, the first DG of NIMASA, the first woman President of CILT, and Abuja MoU; Mrs. Margaret Orakwusi, Princess Vicky Haastrup, Mrs Jean Chiazor- Anishere, Juliana Gunwa, Mrs Bola Muse, Dr. Amy Jadesimi, Lami Tumaka, and many more. We all tried to break the bias. We worked hard and built our capacity,” Tumaka said.

Also speaking at the virtual meeting, Dr. Mercy Bello- Abu, the Rivers State Coordinator for Women International Shipping and Trading Association (WISTA), also lauded the theme around training and retraining, which she recognised as a path to achieving great goals as women.

She encouraged women to start by knowing and valuing their worth and to make efforts to become visible even after acquiring knowledge and being trained.

Dr. Abu also charged women in the maritime industry to acknowledge compliments given to them as well as make an impact in the career lives of younger women, as a way of making themselves even more visible.

She praised women for showing much resilience during the COVID-19 lockdown and called for a more barrier-free work environment to enable women to showcase the best of their capabilities.

Abu advised women in the maritime industry to be authentic and follow the words of former First Lady of the United States of America, Mitchell Obama, who wrote in her book that “I know myself.’

In his vote of thanks, the Secretary-General of Abuja MoU, Captain Sunday Umoren, encouraged women to give themselves to training and exude excellence, which would make it impossible for them to be denied a place in the affairs of the industry.

Giving a summary, the National Publicity Secretary of CIoTA, and staff of NIMASA, Mrs. Chizoba Anyika called on women to see opportunities in the industry and make themselves available however tough the terrain may seem.