Major truck owners operating in Lagos ports have opened a can of warms, revealing monumental fraud and extortion in the electronic call-up system that was introduced by the Nigerian Ports Authourity (NPA) in February. 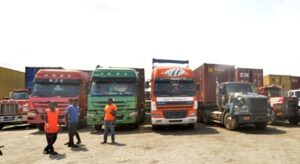 The truck owners who spoke as members of Council of Maritime Truck Unions and Associations (COMTUA), and concerned stakeholders said that implementation of the e-call up system is fraudulent and opened to sabotage.

Those who spoke to journalists over the weekend expressed shock that, contrary to the agreement that the electronic call up system will cost N10,000, truck owners now pay as much as N31,500 for the service.

In addition, they said the system has been so compromised that, trucks that had genuine electronic call up into the ports are not allowed in, even as they stated that the trucks that are currently in the terminal found their ways in fraudulently.

They also alleged that there is a high level of collusion between officials of the Lagos State Government that were drafted into the special task force, and officials of NPA, Messrs Truck Transit Park (TTP), who are the operators of the truck parks and the Police.

A top member of COMTUA; Mr Leye Thompson, who spoke on Saturday said the group had given its support to the e-call up system, but lamented that the operators of the e-call up; TTP reneged on the promises they made.

“When they came in, they said they will be charging us N10,000, that is you pay your N10,000, you meet all the requirements, under 24 hours you will be in the port. We looked at it as a fantastic one, they did it the first week, it worked and we praised them, not knowing that it was the effect of the work of the (disbanded) Presidential Task Team that we saw in the first and second week”.

According to him, by the third week, the electronic call-up system had collapsed and everyone thought it was a teething problem that would soon stop.

Giving a breakdown of the payments, Mr Thompson said: “If you want to eto platform now, you will first pay N500 to register you on their platform, then if you have any job in the port, you will pay N10,750 register your presence; that is, booking, after that one you will pay another money for verification(N6,000), then you pay N10,000 for merging, then you pay another N10,000 for exit.

According to him, even after paying the N31,000, there is no possibility of leaving the truck park in two weeks.

He also alleged that, staff of TTP are the ones selling tags to trucks that did not pass through the eto platform.

“You won’t believe it that it is the TTP staff that are selling tags to people that followed illegal route. They will collect details of your truck, go inside the terminal to go and print it out and give it to you. And when you get to the port, they are still the same people at the port that will collect N30,000 from you and they will open the gate for you to go in”, he lamented.

He said further that, “every other people that have genuine document through the normal process, can not go in”, even as he alleged that there is high level of forgery of the electronic tickets with the collusion of officials of TTP and those he called ‘movers’, who help to collate the number of people who have trucks to access the port illegally.

He cited an instance when the Chief Operating Officer of TTP was confronted with facts about the involvement of employees of the company in the illegality of moving trucks into the port. He said the TTP boss denied any such possibility, until he was confronted with evidence.

According to him, the TTP staff use the remote control in their pockets to create access for trucks that do not have the e-tickets.

According to the COMTUA chieftain, even though the TTP boss vowed to sack the staff that was caught on camera, the illegal practice continues.

Another member of the group; Mrs Folake George also alleged high level sabotage and criminality in the implementation of the electronic call up.

“They said they are doing electronic call up, we book through them, we pay N10,000, they changed it to N10,750, we did not complain. They never told us that, when we now come and enter in to the satellite truck park, we will now pay for merging of TDO and we will now pay again for going out of that place that we have paid money to book. From N10,000, it became N32,000, nobody is talking, and even that N32,000, we are not getting value for money; no service”, she disclosed.

She said, in most cases, trucks that keyed into the eto platform, and got to the truck park at either Ijora or Tin Can may stay there for almost two weeks, while the ones that circumvented the process through collusion with TTP officials are the ones gaining access into the port.

Another truck owner; Mr Paul Alama also corroborated Mrs George. He confirmed that the operators of the eto electronic call-up platform are only interested in collecting money.

According to him, there is high level collaboration between the Police, LASTMA officials, NPA officials and TTP officials.

Also speaking, another truck owner, Mr Adeyinka Aroyewun said there is no electronic call-up facility at Tin Can port. He said operators of eto call up system are only interested in how much they could make.

“The eto system is not working at Tin Can port, as a matter they don’t even have any facility on ground around Tin Can; there is no device or barrier to check any call-up. There is practically no eto facility at Tin Can, what they are doing is to extort our people, collect the money and offer no service.

“The moment you pay them, whether your vehicle moves or not, you are your own. All the vehicles that obeyed eto regulations are all kept at the ‘pre-gate’ at Otto Wharf, they have been there in the last two months, but the ones without eto documents move freely on daily basis. As I speak with you, all vehicles with genuine eto tickets and have paid N31,250 are still in NAPL garage now.”

He also corroborated the allegations that personnel of government in charge of enforcement of the electronic call-up system are responsible for the fraud. He listed them to include officials of LASTMA, Police, NPA and personnel of TTP.

“Whenever you have a genuine eto call up, NPA will tell you it is fake and turn you back, but the one they know is generated by them and does not have any semblance of reality, they allow it to go and they charge between N100,000 and N150,000”.

According to him, the extortion at Apapa is being perpetrated by NPA, Police, LASTMA and personnel of TTP. But, at Tin Can, they are joined by labourers of the road construction company, who will only open the road after they have been settled.