UK Logistics Woes To Intensify On Strike Action At Ports

Several UK ports are expected to see walkouts over the next few weeks as a result of industrial action, with strike action underway at the Port of Liverpool and set to come into effect at the Port of Felixstowe next week. 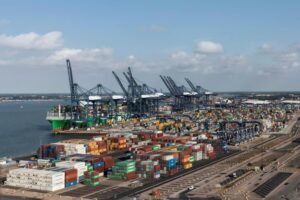 Port of Liverpool operator Peel Ports Group confirmed in a statement that members of Unite the Union employed at the site’s container operations will go on strike from the start of this week as a result of a pay dispute, with the industrial action expected to last from 19 September to 3 October.

The port operator had offered workers an 8.3% pay increase, along with a £750 one-off payment once union members rejected the original package.

Made up of a 7% increase in basic pay and 1.3% from pay rates and allowances, Unite claimed the offer was a pay cut in light of the current levels of inflation in the UK.

Operator the Felixstowe Dock and Railway Company , which had been offering a 7% pay hike and a £500 pay-out, said that there is no prospect of an arrangement being reached with Unite.

“The collective bargaining process has been exhausted and there is no prospect of agreement being reached with the union,” the company said.

“The latest strike action is entirely of Felixstowe’s own making. Rather than seeking to negotiate a deal to resolve the dispute, the company instead tried to impose a pay deal,” said Unite national officer for docks Bobby Morton.

“Further strike action will inevitably lead to delays and disruption to the UK’s supply chain,” he added.

UK supply chains have been buffeted by the impact of the COVID-19 pandemic on global distribution, as well as the disruption seen in the wake of the country’s full break from the EU, a chronic shortage of heavy goods vehicle (HGV) drivers periods of warehouse capacity tightness and the Ukraine war.

The closure of two key container ports is likely to result in further delays of product entering and leaving the country, along with the impact of wider industrial action in the rail sector as employees push for pay increases to match the current level of inflation.

UK inflation fell slightly to 9.8% in August compared with 10.1% in July, but current levels still represent the highest in decades.

Both ports have bulk chemical storage warehousing facilities on-site. Chemicals players Inovyn, Vynova, Huntsman and Mexichem Fluor all have operations at Runcorn, near the Port of Liverpool, while Felxistowe is the UK’s largest container port.