Unacceptable Meddlesomeness In The Trial Of Crew Of MT Heroic Idun

by Joshua
in Editorial

When the controversial tanker MT Heroic Idun sailed into Nigerian waters allegedly to load crude oil at about midnight on August 7, 2022, little did her owners and the crew know that they were sailing into trouble. 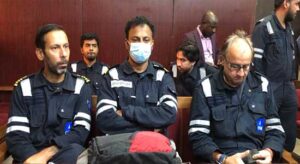 The ill-fated tanker was thereafter accosted by a Nigerian Navy (NN) ship on patrol on August 8, 2022 (shortly after midnight) for not having due NNPC approval and naval clearance.

Between the time of her arrests and now, a lot of things have happened. Just as it promised, the Navy has arraigned 16 of the sailors who were detained on board the vessel after their arrest in Equatorial Guinea where the ship had escaped to from Nigeria.

The arraignment was after the government of Equatorial Guinea had released the ship and its crew for trial in Nigeria.

The trail of the 27 seafarers who were on board the Very Large Crude Carrier is yet another test for the Suppression of Piracy and Other Maritime Offences (SPOMO) Act.

The Nigerian Navy had, in a fact sheet issued to the media, outlined potential charges to be preferred against owners of MT Heroic Idun and crew members.

As promised, they were arraigned recently and the four charges were read to them. The charges include: Attempt to deal in export crude oil without license or authorization. Entering the Restricted Zone around an Oilfield without authorization and thus violating Nigeria’s Exclusive Economic Zone regulations.Falsely accusing a Nigerian Navy Ship of piracy on International Maritime Reporting Platforms after having communicated with the Nigerian Navy Ship without ambiguity about her identity therefore violating sections of the Suppression of Piracy and Other Maritime Offences (SPOMO)Act 2019. Violation of all lawful instructions at sea from Maritime Law Authorities as well as Nigeria’s Miscellaneous Act and other associated national and international laws ascribed to by Nigeria. Violation of Custom and Immigration Laws as acceded by Nigeria regarding the operations of Akpo Oil Terminal being an Oil installation in the Nigerian Exclusive Economic Zone.

Since the plight of the rogue ship and her crew started, there has been a curious international dimension to it. Various interests, understandably propelled by Indian have been mounting pressure on Nigeria to allow the crew go home, and not be tried.

The interest generated by India is quite understandable, because about 16 of the 27 crew are Indians.

The All-Indian Seafarers Union has been calling attention to the case while the vessel’s owners and operators including BP have all asserted that the tanker was operating legally. The vessel’s Flag State, the Marshal Islands, has also filed legal appeals for the vessel and her crew.

The International Chamber of Shipping (ICS) is the latest organization to call for an immediate release from detention of the crew of Heroic Idun.

This is not the first time that the Suppression of Piracy and Other Maritime Offences (SPOMO) Act will be put to test, since coming into effect in 2019. But this is the first time extraneous interests are coming to the fore.

The Act provides the legal teeth for the war against piracy in the Nigerian maritime environment. Since it was signed into law, the SPOMO Act has been very useful in the trial and eventual conviction of many pirates in Nigeria.

We recall that, a Federal High Court sitting in Lagos had sentenced 10 pirates to 12 years imprisonment each for hijacking a Chinese fishing vessel, FV Hai Lu Feng II, in May 2020.

They were arraigned on a four-count charge bordering on hijacking of the vessel in international waters off the coast of Cote D’Ivoire. They were eventually convicted.

Apart from these 10, another set of three pirates had also been convicted under the SPOMO Act. The three men were fined by a Federal High Court sitting in Port Harcourt, Rivers State. They were part of the nine who were accused of hijacking the tanker MV Elobey VI off Equatorial Guinea.

It is an act of conspiracy for global players in the maritime to suddenly form an alliance against Nigeria and the SPOMO Act in the fight against piracy.

It is an irony that the same SPOMO Act that international community, led by the International Maritime Organization (IMO) had commended and even recommended for adoption by its Secretary General, is now being clandestinely undermined.

Undoubtedly, the victories and convictions of pirates have helped to reduce incidences of piracy, not only in Nigeria, but also in the Gulf of Guinea.

Read Also:  Do you support the call by the international community for the release of the crew of MT Heroic Idun

We quite agree with the DG of NIMASA; Dr Bashir Jamoh that, with the SPOMO Act, Nigeria has become the judicial benchmark for the entire Gulf of Guinea in Admiralty matters and usage of the Act

While the conspiracy thickens, news broke also last week that a Danish court in Copenhagen has found a suspected Nigerian pirate guilty of endangering the lives of Danish navy sailors in a firefight in the Gulf of Guinea.

The Nigerian was arrested in November last year when the Danish frigate Esbern Snare was patrolling international waters off Nigeria to protect merchant ships. The Danish authorities even confirmed that three other suspects were detained in the encounter. Four others were killed and a fifth fell overboard.

While the travail of these Nigerian were ongoing, leading to the eventual conviction of one of them, the world was quiet. Even the fact that four were killed and one fell overboard, didn’t move the global maritime community. The Nigerians were presumed guilty, even in death.

Perhaps, the International Transport Workers Federation (ITF), International Chamber of Shipping, and others have been lobbying for the release of the crew and the ship, because crude oil was involved and because the ship and the crew are all ‘foreigners’.

This is the time that the international maritime community should rally round Nigeria, in the fight against piracy.

There was a time the country was ranked as the hot spot of piracy in the world, next to lawless Somalia. Thanks to interagency collaboration, which led to the enactment of the SPOMO Act.

This is the time that international players and nations that have either supported or have promised to support Nigeria in the fight against piracy, should rise above diplomacy. Nigeria requires commendation and not emotion-inspired gang-up.

The world should allow the Nigerian judicial system to do its work, the same way the Danish court was allowed to prosecute the Nigerian recently.