Home » Vessel Ran Aground After Master Fell Asleep In His Cabin

The Danish Maritime Accident Investigation Board (DMAIB) has published its report on the grounding of the coastal freighter Beaumaiden just off the Baltic Sea island of Bornholm last year. The vessel missed a waypoint and headed straight into harm’s way because the captain left the bridge and fell asleep in his cabin, DMAIB concluded. 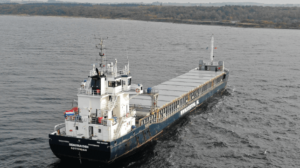 On October 15, 2021, Beaumaiden got under way from Antwerp with a load of fertilizer and navigated to the Elbe and the Kiel Canal to the Baltic, exiting the canal on the morning of the 17th. From Kiel, she headed east, bound for Tallinn.

At about 1700 on the 17th, the master of the Beaumaiden awoke for dinner and returned to his cabin afterwards for a glass of wine and a movie. (Beer and alcohol were permitted on board under company policy.) Just before 2000 hours, the master went up to the bridge to relieve his chief officer. After a short conversation, he took the watch. He was alone, as was the general practice on board, without an AB on lookout duty.

The ship was on a long, straight run on a steady northeasterly course, and her next turn was in about four hours. The watch was uneventful, with little traffic, and the master made some phone calls while the ship motored along. After a while, he went down to his cabin and poured another glass of wine, returning with it to the bridge, DMAIB said.

A few hours later, he had to use the head, and since the one on the bridge deck level did not work properly, he went below to use the head in his cabin. “Whilst in his cabin he felt tired and laid down on the bed to rest. He then fell asleep,” DMAIB wrote.

Meanwhile, the Beaumaiden carried on at the same course and speed. She went past the waypoint for her turn and made straight for shore on the island of Bornholm, Denmark. At about 0255, Danish maritime traffic control authorities noticed the developing situation and attempted to contact the Beaumaiden by VHF and by her listed satcom phone, but no one responded.

At 0325, Beaumaiden’s chief engineer was awakened by violent vibrations. He went aft to the fantail and saw that the lights on shore were stationary, though the prop was still spinning and generating ample wash. He realized that the vessel must be aground, and he ran up to the bridge to investigate. Alarms were sounding and loud music was playing. He throttled back the CPP prop to zero and left to find the chief officer. Together with the rest of the crew, they checked for flooding fore and aft, and luckily they found none.

The chief officer woke the master, and together they went to the bridge and silenced the alarms. After discussing the situation, they decided to try to back down and float off; however, the maneuver did not work, and the chief engineer shut down the main engine.

Shortly after, Danish authorities told the master that the vessel was detained and should not be refloated without an approved salvage plan. Police arrived on board at 0525, and they took the master in custody on suspicion of intoxication. After testing at the station, they determined that his blood-alcohol level was above the legal limit.

“It is likely that the influence of alcohol impaired his judgement and contributed to the decision to leave the bridge and to rest on the bed whilst in his cabin,” DMAIB concluded.

The vessel was successfully refloated by a single tug on October 20 and brought into the Port of Roenne, Bornholm. Since she had run aground on a soft bottom, she suffered relatively little damage beyond some minor cracks and indentations.

After the grounding, investigators with DMAIB went aboard to inspect the ship. They found that the vessel’s bridge navigational watch alarm system (BNWAS) was functional, but it had been turned off. The master was in the habit of leaving it off because its reset button was located in an inconvenient place, and he found it “annoying to constantly move from the navigational chair to reset the alarm” every 3-12 minutes, according to DMAIB. If it had been activated, the BNWAS system would have sounded an alarm in the chief officer’s cabin to alert him there was no movement on the bridge.

After the investigation, the vessel’s operator decided to change its policy and will now “uphold a zero tolerance policy to drugs and alcohol on board its ships.”