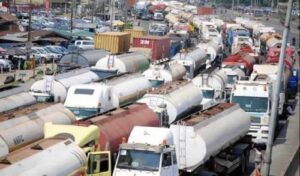 Shipping Position Daily recalls that the Truck Transit Parks (TTP) Ltd, operators of the electronic call-up system, popularly called ‘Eto’, had earlier fingered the heavy concentration of tank farms which has added to the high volume of traffic at the Mile 2- Tin Can axis of the Apapa-Oshodi expressway, as one of the major reasons the electronic call-up system has not being able to function optimally.

The Chief Operating Officer, TTP, Mr. Temidayo Adeboye, further said that the next phase of the project is to fully-incorporate petroleum marketers and their truck drivers into the system to further reduce the traffic gridlock on the Tin Can-Mile 2 axis.

But, in a chat with one of our correspondents last week, Secretary of the Integrated Oil and Gas Petroleum Trucker Drivers (PTD) Unit of the Nigeria Union of Petroleum and Natural Gas Workers (NUPENG), Mr. Charles Ugoji told Shipping Position Daily that PTD drivers already have a trucking system that is working well.

“In our Union, we are disciplined, but truck drivers are not. That is the major problem. The Petroleum Tanker Drivers under NUPENG have a system. If they say they are going on a strike, they all agree to go on a strike. But our problem is that the container truck normal block Mile 2 road. They are the people blocking the road. With tanker drivers, everything goes normally. That is the situation for now”, Ugoji said.

Also speaking, a member of the PTD Task Force at Coconut axis of the Mile 2 – Tin Can road who identified himself as Adebayo Adisa blamed the truck drivers for being the major cause of the perennial traffic along that route. He noted that the reason tankers are still littered on the road is because container trucks constantly block access to the tank farms.

“The problem we are having here in Apapa is not from tanker drivers. Majority of these problems are from the truck drivers. Apapa container drivers are the major cause of this traffic situation we are facing. There is no road to come into our tank farms. Look at this area, how many tankers have you seen here? See as the container trucks have blocked the road. That is the major challenge we face here. The Containers are our major challenge here” Adisa lamented.

On his part, another member of NUPENG who identified himself as Mr. Akeem alleged that the drivers of container trucks do not have a working union compared to that of the PTD. He noted that NUPENG adequately regulates the activities and movements of tanker drivers which according to him, has been very effective.