Western Marine Customs Intercepts 865 Kegs of PMS, Generates Over N2.2Bn In One Year

The Western Marine Command of the Nigeria Customs Service (NCS) in Lagos has intercepted 865 kegs of Premium Motor Spirit (PMS) worth 3.6 million Naira. This is even as the command has collected over N2.2 billion in 2021. 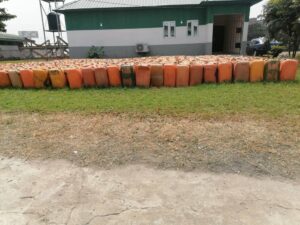 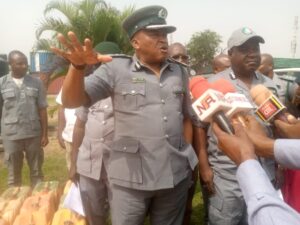 While addressing journalists in Lagos on Thursday, the Acting Customs Area Controller (CAC) of the Command, Deputy Comptrolller Enonche Ochiba noted that the large quantity of PMS was intercepted based on credible intelligence by officers of Coastal and Harbour patrol (Bar-Beach) at Ashipa Beach along Seme Coastal Border area. According to him, no arrest was made as the smugglers took to their heels upon sighting the patrol team.

The Customs boss also noted that between January and December 2021, the Command recorded unprecedented seizures ranging from Heroine, Cannabis Sativa (Marijuana), Rice, Expired Drugs, Used Shoes, Premium Motor Spirit (PMS) and others with a total Duty Paid Value (DPV) N2, 215,180,073.4 as against the total DPV of N1,104,647,370.00 in the Year 2020 which represents over 100% increase.

“These records are strong indications that the operatives of the Command are working tirelessly to combat smuggling on the waterways. The record of seizure for the year 2021 is the total of seizures from 2017 to 2020 for the Command. The records are there with you and they can speak for themselves.

Ochiba rehearsed that the men of the Command are vigilant and on patrol duties to tame the scourge of smuggling activities and other vices on the South Western waterways. He however warned smugglers and would-be smugglers to desist from smuggling as the officers will leave no stone unturned until you are apprehended and prosecuted.