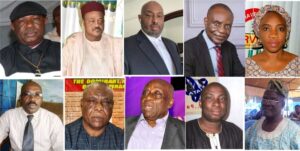 Hassan Bello discharged his duties with humility and highest level of professionalism. He carried relevant stakeholders along including freight forwarders in the industry. We want Hassan Bello back to continue the good work he started. He is the best person to take over from Rotimi Amaechi, as Minister of Transport after 2023. He merits the consideration for Minister of Transportation, looking at his qualification and track record.

I have seen his achievements and I am impressed. He has made the industry practitioners proud. Hassan Bello is a technocrat. He is a patriotic citizen and very passionate and focused in his assignments. He is a great Icon to the maritime industry in Nigeria.

I am highly impressed by Hassan Bello’s performance. It is quite inspiring and commendable. We knew the credibility of Barrister Bello. He should be given more strategic responsibility where he will bring his expertise to bear in moving the industry forward. This is a lesson to us public servants to know that people are watching us whenever we are.

Hassan Bello reformed the council by making it very competitive. During his eight years in office as the Executive Secretary of the Nigerian Shippers’ Council, he supported capacity-building programmes for the media. I am calling on other agencies to emulate his example in supporting training programmes for journalists.

We celebrate the great service, milestones, and giant strides achieved by Hassan Bello during his tenure in office. We are proud to associate with his milestone. We celebrate his long years of selfless service, mentorship, ownership, and working to excel. In celebrating those that excelled, there is a need to also shame those that have not performed and that was what SERVICOM was established to do.

Bello is one of the most detribalized Nigerians and very courageous in carrying out his official assignments. He has several outstanding achievements in office which include abrogation of all forms of illegal and unapproved charges introduced by terminal operators which brought about immeasurable relief to freight forwarders and shippers.

The NSC under Hassan Bello became popular because of the drive to bring a new consciousness in the clearing of goods in the port through the “New Port Order”. But people who enjoyed the old order were resilient in the resistance of bringing in a change. The pressure from these oppositions was turbulent in the past four years.

By and large, he tried all he could to bring in the new port order and we thank him for all the sacrifices he made in allowing the port to continue to receive cargo. Every beginning has an end. We all wish him good luck because he tried his best to revolutionize the maritime sector through the key position as the port economic regulator. The NSC is now known in the environment not as a Shippers Council to protect shippers only but also as an economic regulator.

Hassan Bello is a quintessential gentleman. He is a thorough professional, a legal mind that impacted the agency he headed. He is an innovative personality. He likes and creates ideas. He intervenes in issues that affect all stakeholders whether importers or exporters including the ship owners and I believe that Hassan Bello has created a platform for the agency to grow.

He has followed the initiatives he has created including the Inland Container Depots with zeal and passion which is beyond the call of duty. I salute Hassan Bello because he has done a lot and his talent will still be needed in the Maritime space. I wish him good luck.

Hassan Bello was a trailblazer. He had a smooth account during his tenure. I can say Hassan Bello came, saw, and conquered. He added value during the little period he spent as the CEO of the Nigerian Shippers’ Council. He is one of those who deserves a national award in this country.

A tenure is determined to be good or bad through its achievements. I so much like and commend him because we recorded a lot of achievements during his tenure. When I heard he was retiring I was surprised. If I have my way, I wish the constitution that says he should retire or sent forth should be reviewed so that he can continue inasmuch as any constitution can be reviewed.