What is your position on the Collection of POF 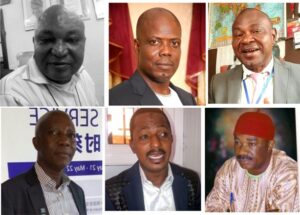 The case of Practitioner Operating Fees is in court. Although it has not got to the border here, the stakeholders say they don’t want to pay POF. My opinion will not be different from other stakeholders. I cannot have a different opinion. I have the same opinion as the stakeholders. We are not interested in the payment of the POF. It is as simple as ABC and the stakeholders are prepared to turn it down anytime.

This POF is an avenue where the government through the Act provides a platform for CRFFN to get funds, to fund their activities and some of the usage of that fund is for capacity building. We all know that as of now, freight forwarding is an all-comer affair. Even though CRFFN is supposed to set standards for trained and dependent practitioners and set minimum standards that you must acquire before you join the profession. But unfortunately, those things are not happening as of now. So if the POF was collected, it would have been a base, like a tool where the CRFFN should have taken money to train the practitioners and it is only those who are trained that can obey the law, comply to trade rules and regulations and advise their clients which are the importers to do honest declaration. So we in NAGAFF actually support the collection of POF because it will go a long way to reposition the industry through capacity building.

The POF is a policy that is dead on arrival. It is not going to fly because, they did not follow due process. POF is not the first approach. People want to see the impact and relevance of the CRFFN.

CRFFN should not just come to the port and say they want to collect revenue, even there is no federal government gazette that can authorize them to collect because it is multiple taxation and it’s going to frustrate business in the port.

The collection of POF, what is the money for? It is for capacity building. Some freight forwarders can go to any part of the country and acquire knowledge under the sponsorship of NAGAFF or CRFFN. Today some of the students in the NAGAFF Academy are still struggling to pay. Some of the students that were first matriculated are still struggling to pay their school fees after I granted them the first scholarship. The collection of POF is for capacity building.

Do you agree that the NPA electronic call-up is a failure?

Do you think the deployment of the Deep Blue assets by NIMASA will curb piracy on Nigerian waters?

Do you think that the terminal operators are justified in their tariff hike?

Do you think that the completion of Apapa road reconstruction will end congestion in the ports?