The World Health Organisation (WHO) has warned that another challenge was looming in the effort to vaccinate the planet, which is a shortage of syringes. 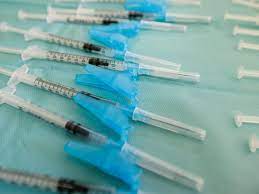 According to the organisation, there could be a shortfall of 1 to 2 billion syringes by 2022, WHO specialist Lisa Hedman said in Geneva.

She added that poorer countries, which often placed small orders and therefore did not have priority with manufacturers, could be particularly affected.

However, the WHO is calling on countries to plan ahead and order in large amounts, if possible, and pay heed that six months’ lead time is often necessary for manufacturers.

In a normal year, 16 billion injections were given worldwide, according to WHO estimates.

Before the pandemic, vaccinations accounted for 5 to 10 per cent of that, or up to 1.6 billion.

But additional 6.8 billion doses of COVID-19 vaccine has now been given worldwide, vastly increasing the demand for syringes, according to WHO estimates.

Syringes for vaccinations differ from those for other purposes.

They usually have a mechanism that ensures that they are used only once.

According to WHO estimates, manufacturers can produce around 6 billion of those syringes a year.

The largest export countries are India and China, it said.

Next year’s demand could be four to seven times higher than the average pre-pandemic demand.

WHO said if there were not enough vaccine syringes, routine jabs such as against measles, mumps and rubella may have to be foregone, Hedman said.