Work resumed at Felixstowe, the UK’s largest container port, after the 8-day strike extended a further day by the bank holiday. Starting on Tuesday, vessels have been offloading as analysts work to calculate the extent of the disruption to the supply chain and everyone waits to see what will happen next in the unresolved labor dispute. 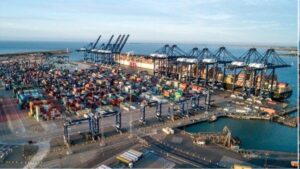 By all accounts, the strike achieved its goal with the majority of the 1,900 union workers remaining off the job. The port employs about 2,550 people in total with the dispute being between the hourly workers represented by the union Unite. The union refused to present the final offer from the port’s operators, a division of Honk Kong’s CK Hutchison, with no new talks scheduled.

In the week before the strike, 29 vessels made port calls at Felixstowe, but last week just five ships called at Felixstowe, according to the analysts at Everstream Analytics. Traffic was down 82 percent with carriers diverting their ships or scheduling calls while ships on dock remained virtually stuck. Felixstowe normally handles more than four million TEUs and around 2,000 ships each year meaning it averages approximately 80,000 TEUs each week. There are approximately 75 intermodal train movements each day in the port.

Five container ships are docked currently with the operations back to a normal pace. The ships on dock are from Maersk, MSC, and COSCO, with other major carriers such as Evergreen due to return to the port this week.

Export containers are backed up at the port with the strike having caused the average time on dock to skyrocket by 82 percent according to analytics from supply chain company FourKites. They said that customers were saving the waiting time jumped up to 9.4 days versus 5.2 days before the strike. By comparison, FourKites says the average days at terminal for export shipments at ports including Rotterdam, Hamburg, Bremerhaven, and Antwerp was up just nine percent.

“The 8-day strike at the Port of Felixstowe ended yesterday, but a ripple effect of complications and port congestion are expected as we head into Q4 and the upcoming holiday shipping rush,” said Everstream Analytics.

As a result of the vessels diverting during the strike, Germany’s main ports saw an increase in traffic leading to increased waiting times, according to Everstream. At the Port of Bremerhaven, for example, the daily number of vessels waiting at anchor to berth at the port has jumped to 18, 63 percent higher than the average in 2022, and the highest count so far in 2022. Similarly, at Hamburg, the average vessel waiting time increased to 42 hours, also the longest wait in 2022.

While the union workers are back on the job, Unite is already discussing additional labor actions. Reports said they were targeting September 19 and might coordinate strikes at Felixstowe and Liverpool to increase the pressure.

“We are more than prepared to notify the company of more days of strike action if we can’t get anywhere,” a union spokesman told the BBC as last week’s strike came to an end. The union is demanding pay raises in keeping with the rate of inflation in the UK. One union official said that the increase could be up to 12 percent whereas Felixstowe’s last offer was around eight percent including a one-time bonus payment.

Port officials have called their offer very fair while saying they regret the impact of the strike on the supply chain and UK consumers.

With the threat of additional job actions looming over Felixstowe, Everstream says, “Knock-on congestion and delays on other European ports are therefore likely to occur in the coming weeks as well as we head into the beginning of Q4 and the holiday season.”

Driven in part by its success with other recent labor actions, Unite appears to be prepared to stand its ground. They are saying they would return to the negotiating table if the company returns without ruling anything out and is prepared to come towards the union’s targets for the pay increase.