The House of Representatives Committee on Nigerian Navy has condemned the spill-over of projects by some contractors handling Nigerian Navy projects. 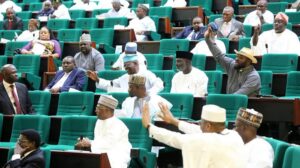 Rep Yusuf Gagdi, the chairman of the committee, expressed their displeasure on Monday, in Abuja, when the Chief of Naval Staff, Vice Adm. Awwal Gambo appeared before the committee to defend its 2022 budget.

He stated that the committee had observed the spill-over of projects as against agreed timeframes, including some that spanned beyond three years, without any sign of completion.

Gagdi said that such projects were neither handed over to the Nigerian Navy nor was there any work in progress by the contractors.

“Henceforth, the National Assembly will not hesitate to call to order any government agency, and in this case the Nigerian Navy, where it fails to check any erring contractors”, he added.

He said that those contractors, whose stock in trade was to waste tax payers monies by taking for granted the delivery of public goods and services within a time frame and quality of job, would not be spared.

The chairman also stated that, where necessary and in line with what the committee saw on ground, it would certainly recommend for increased budgetary allocation to the Nigerian Navy.

He said that this was against the noted enormous problems of the Nigerian Navy, adding that there was need for open and legal recommendations for doors and more windows.

Gambo called for more equipment for the Nigerian Navy, adding that although the Federal Government had boosted the moral of the Nigerian Navy with more platforms, more were, however, needed

He said that the Nigerian Navy had expanded its sphere of influence by rising against internal security challenges, with operational efficiency, huge material and personnel cost for maintaining barracks.

He listed the priority projects for 2022 appropriation to include fleet renewal, capital development, personnel welfare, among others.

Gambo stated that the initial total budget proposal for 2022 was N220.236billion, but that the Ministry of Finance reduced it to N25.8billion, which is equivalent to only 11 per cent of the Navy’s needs.