The Congregation of Registered Freight Forwarding Practitioners of Nigeria – CREFFPON has again petitioned the Minister of Transportation, Mr Chibuike Rotimi Amaechi over what the group described as emergence of some unprofessional signals which are not just capable of posing a threats, but may also smear the integrity of the electoral committee members and the outcome of the entire election thereby subjecting the electioneering process into a disrepute. 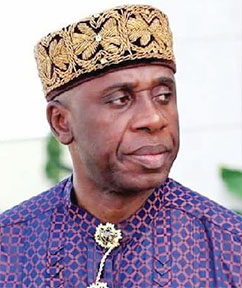 According to the statement “Going by the ideal administrative provisions, at the end of each tenure of the Governing Council , official vehicles allotted or assigned to designated members of the Governing Council are to be returned officially to the management team but this is not the case as both the immediate past Governing Council Chairman and designated council members still use their branded vehicles at their convenience, implying that their earlier insistence on a 4 years tenure and their open objections to the court ruling of 2 years tenure prevails even as the soft copies of the re-election posters trends virally in the industry social media platforms, even campaigning with impunity ahead of the candidates screening and publications of qualified candidates list by the electoral committee.

“To state the obvious, in the eyes of the practitioners, the transparency of this electoral committee and the election itself is suspicious, judging from the above scenario, where the same ministry that constituted the electoral committee failed to administer or direct the needful. Here again, the implication of early appointment of the geopolitical representatives into the Governing Council prior to the conduct of an election of the freight forwarders into the Governing Council, negatively plays out itself”, the group said.

CREFFPON also lampooned the National Association of Government Approved Freight Forwarders (NAGAFF) boasting of winning 10 seats out of the 15 seats provided for the freight forwarders in the Governing Council, and boasting of raising N100 million naira for the purpose of prosecuting its winning strategy, the group noted that beyond these claims, other associations and interested parties were suspicious of a possible internal behind the scene arrangement with the said association to the extent of being too assured of the 10 seats as it claimed.

It continued, “Equally, some of the accredited associations has since queued behind CREFFPON on its several interventions and demands from the Honorable Minister ranging from the objections to the Abuja venue of the election to Lagos as a most suitable venue, the high cost of nomination forms, the security implications of the Abuja venue, the time frame for the execution of the election, etc.”

CREFFPON also stated that it undertook an assessment of the ongoing registrations process at the various headquarters of some of the accredited associations serving as registration centres and discovered as follows; a. Bulk payments are made to the provided account and depleted as soon as the corresponding numbers of individual registration is consummated, then another bulk payment will be made. b. Massive recruitment of non-practitioners suspected to be streets urchins was observed leading to investigation of the registrations process. c. It was discovered that no formal or any format of screening standard was integrated into the registrations process; the system is open to all persons with no particular recourse as no form of prerequisites for professional registrations is required. d. Ideally, a registration process into the Register of the Freight Forwarders entails either by professional academic qualifications or by letter of indemnity letter stating qualifications by practicing experience of at least 5 years written and signed by a Chief Executive Officer of a registered corporate firm with the CRFFN.

“Unfortunately, the present process presents an all comers affairs mainly tailored for an electioneering objectives and afterwards, the Register of Freight Forwarders soars up momentarily and later suffers statistics distortion, making it a two year election reoccurring rituals with thousands later to be recorded as non-yearly subscribers”, it further added.

On the electoral timetable and guidelines, CREFFPON observed that choosing different venues and dates for the screening of candidates from the Western and Eastern ports in Lagos and candidates from the Cargo Airports and land borders in Abuja, was a subtle importation of a political division (northern & southern dichotomy) in the freight forwarding practice in negation of the intents, letters and character of Act 16 2007.

It further noted that “This action further creates suspicion of the electioneering processes in the eyes and understanding of majority of the practitioners. The following buttresses their suspicions further: b. Also observed that, in Item 5: iv of the Electoral Guidelines – with the caption, ‘Eligibility To Contest For Any Position’, the committee stated thus; ‘Pursuant to the provision of this Act, all eligible persons must be elected based on the three operational zones as specified in section 2(1)(g) of the Act.’ In item nos. 5:v; ‘All other registered freight forwarders that meets the above requirements from (i – iv) are eligible but only those cleared by the Electoral Committee are qualified to contest elections into the governing council.’ In item 12 of the guidelines, committee stated that ‘…The decision of the Electoral Complaint Committee shall be final. No appeal shall be entertained.’ c. Equally observed is that in the nomination form, the Committee carefully and deliberately omitted the inclusion in the nomination form the candidates choice of operational zones as specified in section 2(1)(g) of the Act.

“All of these further buttress the existing suspicions of a hatched political moves to returned the immediate past Governing Council members back to complete an erroneous conceived 4 years tenure whereby suggesting that the electoral committee seems to be executing an arranged script.”

The group called on the Minister of transportation, Rotimi Ameachi to urgently intervene over the critical concerns raised.

“Honorable Minister, sir, your urgent attention and intervention over critical concerns expressed by the practitioners cannot be over emphasized. Please help to save and preserve the sanctity of the freight forwarding profession in Nigeria. Above all, the need to douse all expressed suspicions is purely your administrative honor and responsibility.”