A delegation from Akwa Ibom State comprising members of the Ibom Deep Seaport Committee is currently in Seoul, South Korea, to drive Governor Udom Emmanuel’s vision for the rapid realisation of the seaport project. 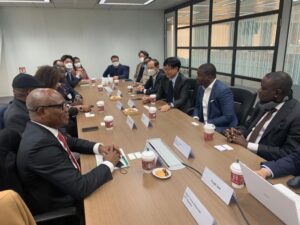 The state delegation is among the Nigerian contingent to the Maritime Sector and Harbour Development programme in Seoul, South Korea, led by the country’s Ambassador to South Korea, Ambassador Ali Magashi.

They include the Secretary to the State Government, Dr Emmanuel Ekuwem; the Commissioner for Economic Development and Ibom Deep Seaport, Mr Akan Okon; and the Chairman of the Implementation Technical Committee, Mrs Mfon Usoro,

A statement by Chief Press Secretary to the Governor, Mr Ekerete Udoh, on Sunday, said the Commissioner of Economic Development and Ibom Deep Sea Port, Akon Okon, had explained that the visit was to help offer inputs for the development of the seaport.

It said the visit would also “enable Akwa Ibom State tap into the broadening bilateral relationship between Nigeria and South Korea, especially in the areas of maritime security and economic development”.