The Senate Committee on Finance has sent out invitations to heads of 60 government-owned firms to start appearing before it from this week. 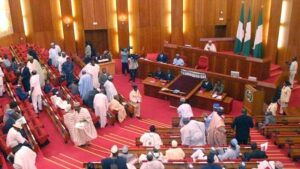 They are to explain their failure to remit various funds running into about N2tn to the Consolidated Revenue Fund account of the Federal Government.

The secretariat of the committee had dispatched letters of invitations to the affected agencies, which contain dates they are expected to appear.

Some of the 60 government-owned firms already summoned, according to a list obtained from the panel’s secretariat, are: the Nigeria National Petroleum Corporation, the Nigeria Customs Service, the Nigerian Maritime and Safety Administration Agency and Nigerian Ports Authourity, among others.

The Chairman of the Senate panel, Solomon Adeola, said the probe was important so that the government would raise enough money to fund the budget.

He said the full scale investigative hearing would also enable the National Assembly to identify various leakages of government revenue which had been leading to budget deficit yearly.

Adeola said, “We are probing the remittances of the one per cent stamp duties by the MDAs to the Federal Inland Revenue Service. To a large extent, there are some mind boggling revelations that we have seen and are quite disturbing.

“We observe that the agencies of the government are divided into three which are, those being fully funded, partly funded, and those not funded at all.

“The rule is that agencies fully funded should pay all revenues accrued to them to the Consolidate Revenue Fund account of the Federal Government.

“Those not funded in accordance to the Fiscal Responsibility Act should remit 80 per cent of their operational surplus.

“The most disturbing issue we found out was that those fully funded still spend the revenue they generated and still collect allocation from the budget including recurrent, personnel and capital.

“Both the office of the Accountant General and the Fiscal Responsibility Commission have told us that what some of these agencies are doing constitute high level of illegality because that amount to diversion of government fund.

“We demanded the audited accounts of the agencies in the last five years which we are reviewing. Some of the revelations there too are terrible.”