.Says election should hold in all geo-political zones

The Minister of Transportation; Mr Rotimi Amaechi has given a directive for the conclusion of the Governing Council elections of the Council for the Regulation of Freight Forwarding in Nigeria (CRFFN) within two weeks. 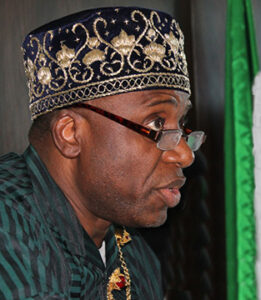 Amaechi stated this on Wednesday after meeting with all the 30 aspirants for the CRFFN Governing Council election.

Our correspondent who spoke to some of the aspirants gathered that the Minister said the Ministry cannot afford to go contrary to the enabling Act or undermine the constitution federal republic.

Amaechi, according to the aspirants said he was more concerned with the emergence of a new Governing Council to be inaugurated while requesting the cooperation of the stakeholders so that in the next two weeks, the election should have been concluded.

Sources said that after giving the directive, the Minister took his leave and directed the Permanent Secretary to go ahead with details of the electioneering process.