Terminal operators must contribute to the total reconstruction and re-organisation of the Apapa seaport, the Federal Government said on Monday.

Minister of Transportation, Rotimi Amaechi, said this was important because the problem with the seaport had revolved around efficiency issues. 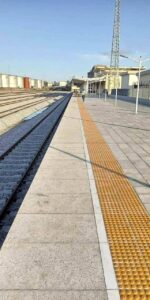 The minister also stated that he observed the drastic change in Apapa port on the day the President Muhammadu Buhari visited the facility to inaugurate the Deep Blue Project.

He was quoted in a statement issued by his media office in Abuja as saying, “I was in the train with the President on that day and noticed that everything had disappeared, even inside the port that looked like a market place was very well organised; no person was found loitering about, no trucks.

“What it shows is that the problem of the seaport is the problem of efficiency. If they had the capacity in just one night, because I was there the previous evening, and when I came back in the morning, everything had disappeared; if that can happen in one night, it means that the problem is management, nothing else. Do we need to wait for the president to come before we can be efficient?”

Amaechi added, “What I’ve done was to have a meeting with the terminal operators, and I told them that they have to contribute to the reconstruction of the Apapa seaport.

Read Also:  “I Am Not Aware That I Suspended Hadiza, I Am Not The President” – Amaechi

“We must rebuild the Apapa seaport, taking into cognisance all the issues that we are seeing now that is frustrating the seaport, like where do you park the trucks, how many trucks are coming into the seaport at what point in time?”

Amaechi described the seaport as a security area that was not meant for everybody, adding that the Federal Ministry of Transportation would partner the Nigeria Customs Service and Nigerian Ports Authority to solve the problem in Apapa.

He said the movement of cargoes from the seaport through the rail lines, when the service begins, would also help in arresting the situation at the port.