The crisis that has bedeviled the Association of Nigerian Licensed Customs Agents (ANLCA) seems to be coming to an end soon, as the National Executives Committee (NECOM). 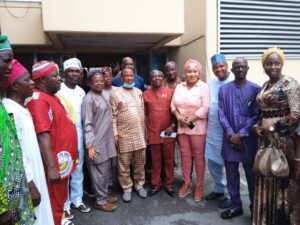 This is because executives of the association has paid a courtesy visit to the Chairman of a tribal group within its fold; the Oodua Maritime Logistics Association, Chief Oye Ariyo,.

A source informed our correspondent shortly after the in-house meeting that the essence of the meeting was to reconcile the aggrieved members of the group with the association.

He informed that the Oodua group will serve as a mediator in resolving the crisis soon.

According to him, “the meeting is for reconciliation, there is an issue on ground that we want to resolve; that’s the essence of the meeting.

“What we achieve at the meeting is that everybody is ready for reconciliation, so Oodua is serving as a mediator to resolve the crisis, because we are a major shareholder. By the grace of God, within a short time the crisis will be resolved”.

Also speaking to our correspondent shortly after the meeting, the national secretary of the association, Mr Babatunde Mukaila said the essence of the meeting is to seek reconciliation with the aggrieved members

“So we are here to seek a way forward regarding the crisis that has bedeviled ANLCA for close to four years.

“We are open for dialogue and to meet with the aggrieved members, I see this is a step forward in resolving the crisis.

When asked why the reconciliation move didn’t place when their president was around, the acting president, Dr Kayode Farinto simply said, “this is the time God wants it to happen, this kind of meeting have been going underneath”.