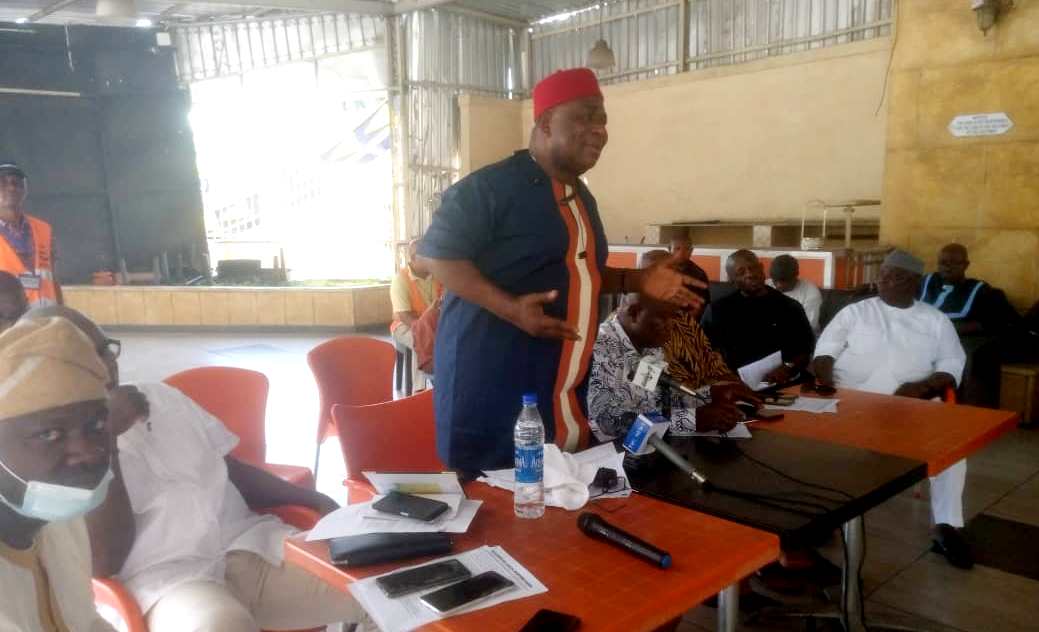 Speaking during a press briefing yesterday, one of the leaders of the ANLCA Western zone, Chief John Ofobike, who lampooned the Tony Iju-led National Executive Committee (NECOM) for parading themselves as executives despites court order restraining them from doing so, informed that Tony Iju led suspended NECOM’s is suspiciously hobnobbing with a non-friendly individual and group in a contentious association with ANLCA

The founder of NAGAFF; Dr Boniface Aniebonam at the inauguration of the association’s new President, revealed that he advised the ANLCA President to take action which he believe to have brought peace into the association.

Apparently referring to the recent statement by the founder of NAGAFF, Ofobike added that the ANLCA President has subjected ANLCA to a near subservience; running to a splinter organization to take briefs on how ANLCA decisions should be made, while adding that his action has lowered the bar of wisdom, pride and integrity of the association

Ofobike who also spoke against the continuous parade of the allegedly suspended NECOM members stated that the regular infringement and flagrant disregard of court orders has pushed the chapter to show as a matter of urgency, the need for caution to avert the bigger picture of proscription adding that regular flouting of court orders/injunctions is a bare faced invitation to anarchy.

He however urged the Board of Trustees’ Members led by Alhaji Taiwo Mustapha to intervene by appointing or providing leadership in the suspended positions in the National and Zonal levels, to stem the tide of despondence among members.

According to him, “Based on the prevailing but rather precarious circumstances. We are constrained by the absence of proper officers owing to the JUSTICE AIKAWA’S COURT ORDER (FHC/L/CS/921) oF 26 August 2021 restraining all elected NECOM from parading themselves a9 National and Zonal officers respectively.

“On the basis of this therefore, the zone in compliance of the order does not have either the zonal Co-ordinator or the Secretary as enunciated by the A.N.L.C.A. Supreme constitution. The constant breaches, flouting and brazen show of impunity by the suspended Necom led by Tony Iju has become most unsettling if not unbearable.

“The regular infringement and flagrant disregard of court orders has pushed us to show as a matter of urgency, the need for caution to avert the bigger picture of proscription. Should A.N.L.C.A. continue with this spate of abuses, it would present her to the eyes of the law and the general public as an Association of irresponsible group of persons. The western zone of A.N.L.C.A. has enjoyed the reputation of being an Association of professional, law-abiding, and peace loving persons. In view of this therefore, the western zone will not spare any action to stem any breach of peace or violent confrontation with the errant persons against the law.

“The current fragile peace being experienced in the Country requires proper and structured approach to issues of dispute. The court is the most dependable and acceptable arbiter and the regular flouting of court orders/injunctions is a bare faced invitation to anarchy’.

“On the basis of the foregoings, the alliance of A.N.L.C.A. Associates Western Zone do hereby declare that we are no longer comfortable seeing Tony Iju Nwabunike led suspended NECOM continue to pelt mud of impunity on our hard earned reputation via the suspended NECOM’s suspicious Hub-Nob with 4 non friendly individual and group in a contentious association with ANLCA non challt and zero interest in the wellbeing of A.N.L.C.A members.

“The Tony ‘Iju-Nwabunike led suspended NECOM’s continued parading themselves despite the restraining order FHC/L/CS/921/2020 by Hon. Justice Aikawa. The ANLCA Western Zone can no longer continue to exist in the interregnum, hence she finds it difficult to galvanize the interest of its teeming members in Western Zone”.

“Tony Iju-Nwabunike has shown lack of capacity to grasp the dynamics of rule of law, sovereign reasoning and diplomatic respect of the corporate entity he leads.

“Tony Iju-Nwabunike has lowered the bar of wisdom, pride and integrity of Association of Nigeria Licensed Customs Agents (A.N.L.C.A).

‘Under his watch, he subjected A.N.L.C.A to a near sub-servience; running to a splinter organization to take briefs on how A.N.L.C.A decisions should be made.

“Tony Iju-Nwabunike has subjected ANLCA to an extension of NAGAFF and this is not acceptable by this group. His indiscrations have eroded A.N.L.C.A’s reputation into near oblivion,” he said.