Home » Anxiety At The Ports As NAFDAC Workers Embark On Strike

Anxiety At The Ports As NAFDAC Workers Embark On Strike

There are fears over clearance of regulated products in the nation’s seaports as Medical and Health Workers Union of Nigeria (MHWUN) branch of the National Agency for Food and Drug Administration and Control (NAFDAC) on Wednesday commenced an indefinite strike. 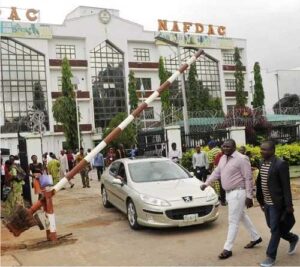 Speaking on Wednesday at NAFDAC office in Lagos, Auwalu Yusuf Kiyawa, state chairman of the union, said the strike begins is with immediate effect.

Kiyawa said the union will not call-off the strike until the workers are paid their welfare packages.

He said it was a national strike, contrary to some reports that it was only in Lagos and the other South-West states, adding that the Abuja branch and other parts of the country did not get the notice for the strike on time.

“There was a misinformation, which was the reason people in Abuja went to work today, Wednesday. This has been resolved. We do not have a divided union in NAFDAC,” he said.

Adetoboye disclosed that a motion was moved that the union should immediately proceed on an indefinite strike action until all its demands are met after an emergency meeting with the Federal Area Council, Lagos and NAFDAC Branch of MHWUN.

Some of the demands of the union, according to him, are that ‘‘The congress frowned at the prolonged inaction on the payment of promotion arrears for 2018, 2019, 2020 and 2021; the congress agreed that action is long overdue as all measures to resolve the matter has not received management cooperation.

“The issue of additional allowances was discussed and the members of congress rejected the continued delay in the approval by National Salaries Income and Wages Commission. It was noted that since the reduction of NAFDAC salary in year 2013 all efforts to resolve the issue to ameliorate the suffering of staff members have ended on the table of NSIWC.

“The congress raised concerns on the issue of GMP inspection and GMP training that has been hijacked by some microscopic few. Members of congress were unanimous in rebuking management on the delay of the severance allowance and call for an immediate action to save these poor retirees.

“The congress frowned at the recent reversal of the skipping by management as evident in the invitation for promotion during the last promotion exercise. The congress demands immediate reversal to status quo.”