The Association of Registered Freight Forwarders of Nigeria (AREFFN) Kirikiri Lighter Terminal Chapter have inaugurated its newly-elected executive members. This is even as it has called for the peace and synergy of all sister associations and members. 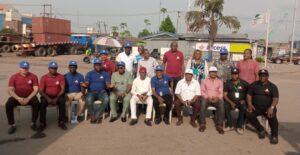 Speaking during the inauguration in Lagos on Thursday, the National President of the Association who was represented by the National Secretary, Mr. Frank Obiekiezie noted that the chapter has been able to set the pace for other chapters to emulate.

Obiekezie stressed the need for internal democracy and unity amongst the members of the association and other sister association. He charged the newly-elected executives to work together as a team to achieve the common goals of the chapter.

“There was an executive before you, and it is expected that you progress than your predecessors. You should improve on the activities and deepen the presence of the association here.

“The issue of disharmony has been known but your presence is to compliment. We are not here to fight anybody. It is only when you work together that you achieve more. You have no option than to synergise because without it you would die individually and collectively. If every association imbibes internal democracy. When we see our chapter doing well, the implication is that we have a succession team” Obiekezie said.

In his acceptance speech, the newly-elected Chairman, Otunba Michael Adekoya said the chapter is set to make impact to the freight forwarding business.

While appreciating members of the association for giving him the opportunity to serve, he pledged that his administration would ensure all challenges faced in freight forwarding business at the Lighter Terminal chapter is adequately resolved through constant stakeholders’ engagement.

Also speaking, Barrister Emmanuel Ohambele, Legal Adviser of AREFFN, stressed the importance of adequate education and insurance for every freight forwarder. He however advised all members of the association to ensure they utilise the insurance scheme available for freight forwarders as a preparation for their retirement. He also urged them to also avail themselves of the ongoing training and certification at the headquarters in freight forwarding, logistics and supply chain.

On his part, Chairman, KLT chapter of the Association of Nigeria Licensed Customs Agents (ANLCA), Comrade Goddy Sewa Solej pledged his support and collaboration to the newly- elected administration. He charged every freight forwarder on the benefits of synergy while calling for prayers for the resuscitation of peace to ANLCA.