The Association of Registered Freight Forwarders (AREFFN) has tasked the Nigeria Customs Police unit to ensure standardisation of the ports by checkmating the indiscriminate multiplicity of Customs formations at the nation’s seaports. 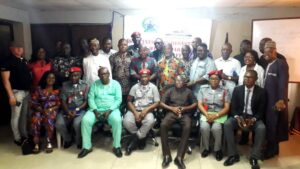 While addressing a delegation of the Nigeria Customs Police Unit Zone “A” during a working visit at the association’s headquarters in Lagos on Thursday, the National Secretary of AREFFN, Mr. Frank Obiekezie decried the multiplicity of Customs formations on the road, such as the Federal Operations Unit, Customs Strike Force, Customs Police and others, adding that their activities is greatly hampering trade facilitation.

Obiekezie noted that some ports are more user-friendly than others stressing the need for port standardisation where same policies are implemented without discrepancies. He however called for a level playing ground where Customs agents can experience seamless Customs processes.

While commending the delegation for their visit, Obiekezie harped on the importance of effective communication and constant engagements of Customs and stakeholders in order to enhance robust relationship for effective trade facilitation.

“One of the major reasons I stopped clearing cargoes at Tin Can is because of the multiplicity of not necessarily statutory units of Customs created by the Customs Area Controller. We have so many of them. One of them is what we call MREP. When you bring a consignment and you go through the due process, one or two units will inform you that they are representing the CAC and whatever you do, if you don’t pass through them, you have not started. It is not just passing through them, but also what goes with it.

“The truth is that it takes two to tango and also some of our members are not saints. But before any agent commits himself to an importer to bring this or that, he must have gone through the assurance and approval of an officer. If the Customs and agents decides to do the right thing and stand by it, the ports will be okay. We are the ones who advise our importers on the way to go, but most of these advice cannot be given without hearing from the Customs officer on that seat” Obiekezie noted.

On his part, the Provost Marshall, Nigeria Customs Police Unit, Ikeja Zone “A”, Assistant Comptroller, B.S Sani informed that unit came into existence in 2017 for the purpose of overseeing the activities Customs and Customs stakeholders.

Sani noted that the essence of the visit was to familiarise with the association and listen to their challenges as regards Customs processes and personnel at the ports. He stressed that the main function of the unit is to interface between other stakeholders and the Service, instill discipline and ensure that the right thing is done for effective trade facilitation.

Also speaking, the National Public Relations Officer of AREFFN, Mr Taiwo Fatomilola lamented the difficulties faced at Tin Can and Grimaldi ports in the clearing of cargoes and vehicles. He alleged that there are lots of anomalies associated with the Vehicle Identification Number (VIN) valuation due to breakdown in Server and also Customs intentionally blocking the system in other to meet their revenue target.

Fatomilola however called on the Customs Police Unit to investigate and address the irregularities and anomalies associated with Customs clearing processes at the seaports in Lagos.

On his part, the National Financial Secretary, AREFFN, Rev. Alex Nwokedi noted that the level of importation at the ports has gone down due to high inflation rate in the economy. He added that this is as a result of the implementation of some Customs policies.

Nwokedi said the association is optimistic that the Customs Police Unit will address the issues raised.