The Nigerian Navy has urged the Federal Government to build a wall across the country’s borders to stop proliferation of arms and ammunition. 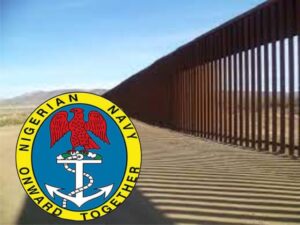 Commodore Jemima Malafa, who represented the Nigerian Navy, said this during an interactive session on four bills pending before the House of Representatives Committee on National Security and Intelligence on Monday in Abuja.

“We should build a wall between our country and the neighbouring countries,” she said.

“I was in Chad recently and discovered that most of the countries that surround us do not have armouries and that is why most of their citizens get arms that they sell to make money.

“I blame foreign countries that sold and donated arms and ammunition for them without recourse to where they would keep them after use.

“It is as a result of this that Nigeria is in deep crisis; these arms and ammunition will always find their way to Nigeria.

The News Agency of Nigeria (NAN) reports that the four bills – the first is a bill for an act to establish the National Commission against the proliferation of Small Arms and Light Weapons.

The last one is a bill for an act to designate the month of November as the National Appreciation Month for Security Agencies.

Mr Shehu Ahmed, representative of the Department of Security Service (DSS) in his contribution said the proposed bill for the establishment of the commission was commendable.

He said that the Director-General of the commission should not be encumbered with too much power, adding that people of questionable characters should not be allowed to work in such office.

He called for the independence of the commission, adding that henceforth, it did not have to source for staff from other security agencies.

He said that on CCTV, all the security agencies should have access to it to aide investigation of any kind, adding that the explosive act bill would help achieve the desired national security.

Commodore Friday Ogohi, a representative of the Defence Intelligence Agency (DIA) said that the bill on National Commission would help in the effective control of light weapons.

He said that the structure of the commission should be hinged on command and control, adding that membership should be drawn from existing security agencies based on experience.

He said that though the supervising ministry was not indicated in the proposed bill, adding that it was advisable that the Ministry of Defence oversaw the commission.

Ogohi also called for the establishment of special court to arrest the menace of arms smugglers and illegal arms, stressing that the CCTV would further boost the fight against bandits and other criminality.

According to him, public places such as schools, churches and work places should be considered for CCTV as this will help to monitor the activities of scavengers by security agencies.

Air Commodore Olasunkami Abu, who represented the Chief of Air Staff, said that proliferation of arms was posing a great threat to Nigeria’s socio-economic development.

He said that this portends a great danger to national security, adding that membership of the commission should be drawn from the armed forces and the immigration.