I don’t want maritime stakeholders to chop-off my head, industry too dirty

by Joshua
in Featured, News, Uncategorized

The Minister of Transportation, Rotimi Amaechi has admitted that he pays more attention to the rail sector than the Maritime sector. 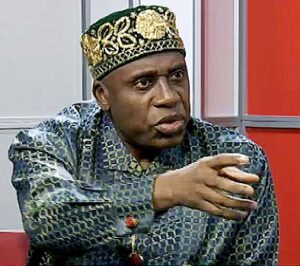 Amaechi, while speaking at the flag-off ceremony of wrecks removal by the Nigeria Maritime Administration and Safety Agency (NIMASA) lamented that the maritime industry is a mafia industry, dirty and devoid of unity.

The NIMASA boss said: “When I was coming (for the wreck removal), I was complaining to the Minister bitterly that I don’t know whether you are Minister of Transportation or Minister in charge of rail only, because we’ve not been hearing about the Maritime.

“While complaining, I mentioned to him that railway consumed money and we produce money; the railway waits for allocation from the federation account, but federation account waits for us (maritime) to give them money, so in view of that I think we deserve equal attention”.

However, while reacting to the allegation, the Minister posited that the DG’s statement is not completely true, this is even as he gave various reasons he has paid more attention to rail than the maritime sector.

Amaechi informed that the Nigeria maritime sector was the first place he gave attention to, but due to disunity and dirty deals happening in the industry, he had to pay more attention to where he will be more useful.

Amaechi who started with the disunity among the maritime press, went further to state that the battle he went through to stop the payment for the controversial Secured Anchorage Area. He disclosed that, while fighting the battle to stop the secure anchorage area, many government officials and stakeholders in the maritime sector teamed-up with the company to fight him from stopping the Secured Anchorage Area.

He added that it is only in Nigeria you find Ship owners without a single ship, while also blaming the Nigeria Ship owners for reasons the country is yet to have a National Shipping line.

According to him, “when maritime stakeholders petitioned against me directly to the President, over maritime security, a company in the Maritime sector was collecting $2500 the first day in their so called anchorage area, the second day $1500 multiply by 30 days, then they escort you (the ship) to the seaport.

“One of the petitions they wrote is that I was the owner of the Deep Blue Sea Security and I asked the President, how much is the contract of the Deep Blue Asset – US$195 million, Lagos to Ibadan is US$2 billion, which should I collect; $195 million or $2 billion dollars.

“The reason you see me fighting that is because, that $2500 he is putting in his pocket, will be paid by ordinary Nigerians, because the money is added to the cost of goods and transportation.

“So I ensure that that stop, it is either I am removed or it stops and when I finish my tenure, maybe he can continue,

On neglect of the maritime industry, Amaechi said: “You raised the issue of me not paying attention to Maritime, that’s not completely correct, because each agency in the ministry of transport is allowed to operate as its own, I have no business interfering, the reason why you were appointed is because you are an expert in that field, I am not, my job is to coordinate the agencies in the ministry, so whatever you bring forward is what I take to the cabinet”

“Let’s ignore that and go to the other aspect, how many of you are united in the maritime sector, beginning from the press, I have to fight a battle first, I said put yourself together, they said no, different associations and when you see where men are fighting among themselves, then you move.

“So should I put my head where they will chop it off? Or where I can be focused and deliver for the people”, he said.