Association Reiterates Call For Removal Of Stockfish From FOREX Ban

The Stock Fish Importers Association of Nigeria has reemphasised its call for the removal of stockfish from the FOREX ban list in 2022.

The Chairman of the association, Mr Gregory Ilobinso, spoke on Friday in Lagos. 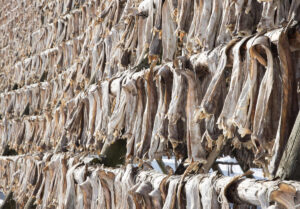 The Norwegian Government had called on Nigerian government to remove stockfish from the list of the 43 items that were restricted from accessing foreign exchange.

According to him, stockfish has become part of the Nigerian culture in the preparation of soups because of its unique taste.

In his appeal to the government to relax the FOREX ban on stockfish imports, he described the produce as a major protein source.

“Stockfish is a major source of protein in Nigerian diet and cannot be cultivated or processed within the country.

“We know the Federal Government on its part is making efforts to promote local aquaculture trade but, stockfish import does not affect local fish productivity.

“Stockfish has no alternative but can only be cultivated and processed in temperate regions. There is no substitute to stockfish in Nigerian cuisines,” he said.

Ilobinso also noted that the difficulties the importers of stock fish face may likely lead to the disappearance of the produce in local markets soon.

He also noted that it was a tough time for the sector but the importers hope to have stockfish excluded from the FOREX ban.

“For continued importation of stockfish into the country we constantly need the US dollars and it is not easy to access owing to the current state of the economy.

“It is really a tough time in the stockfish trade. Stockfish as we know is officially excluded from imports that can access foreign exchange from the CBN.

“The essence of the stakeholders’ meetings we have been having is for the government to exclude stockfish from the foreign exchange ban list.

“No economy is entirely self-sufficient, the government should consider lifting stockfish from the FOREX ban,’’ Ilobinso said.