A long-running dispute that had seen a Swiss product tanker; San Padre Pio detained in Nigeria has finally come to a close on December 29, just shy of four years after the vessel was first detained. 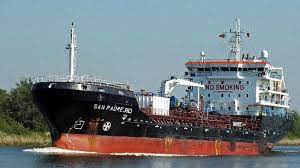 Swiss officials have confirmed that just over two weeks ago the vessel left Nigerian-controlled territory informing the International Tribunal for the Law of the Sea (ITLOS) in Hamburg that the matter had been solved through diplomatic action.

The Swiss-flagged San Padre Pio, 7,600 dwt product tanker was operating in West Africa when the vessel was intercepted on January 23, 2018, and ordered by the Nigerians to sail to Port Harcourt, where it remained at anchor under detention. Nigeria accused the ship and its crew of violating territorial waters and conducting an illegal ship-to-ship transfer of gasoil.

Swiss shipping company ABC Maritime, which was the manager of the vessel, sought the release of the vessel and reports that it successfully defended the ship in the Nigerian High Court of Port Harcourt. The ship and its crew were found not guilty and acquitted of the charges. The acquitted crew were safely repatriated, but the vessel remained in Nigeria.

The Swiss authorities took the case to ITLOS seeking the release of the tanker. The international tribunal also found for the Swiss company and ordered the return of the vessel.

The departure finally took place on December 8, 2021, less than two months shy of four years since the vessel was detained. The vessel initially sailed to Togo, where she arrived on December 11, and she later moved to Abidjan, Cote d’Ivoire, where AIS data indicates she remains.

Once the vessel was outside Nigeria’s exclusive economic zone, Swiss authorities notified the tribunal that the pending legal proceeding pending could be discontinued.

In accordance with the terms of the MoU, Switzerland, and Nigeria were able to resolve their dispute over the San Padre Pio. Nigeria also confirmed that it had no objection to the withdrawal of the case, and on December 29, the tribunal removed the case from its docket officially bringing the matter to a close.