Bill Of Lading And Carriage Of Goods By Sea

There are many ways goods can be shipped by sea. Many exporters who sell abroad regularly will ship
their goods in containers. If their volumes are sufficient to fill a container then the container
will contain only their goods, this is a Full Container Load [ FCL] shipment. If the goods are
insufficient or consists of only a small quantity then the goods are consolidated with other
parties / shippers goods and shipped in a Less Container Load [ LCL] form. Whilst the container
themselves are carried by shipping lines with fixed schedules and voyages, often the shipments are
arranged by freight forwarder. The contracts of carriage are often bills of lading or seawaybills. 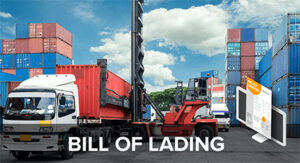 A bill of lading is a document signed by the shipowner, or by the master or other agent of the
shipowner, which states that certain specified goods have been shipped in a particular ship, and
which purports to set out the terms on which the goods have been delivered to and received by the
ship. After signature, it is handed to the shipper, who may either retain it or transfer it to a
third person. This person may be named in the bill of lading as the person to whom delivery of the
goods is to be made on arrival at their destination, in which case he is known as the consignee; if
he is not named in the bill of lading, he is usually known as the holder or indorsee of the bill of
lading.

The three functions of the bill of lading are:

The bill of lading is a symbol of the goods specified in it. Its possession is equivalent to the
possession of the goods themselves, and its transfer, being a symbolical delivery of the goods, has
by commercial usage the same effect as an actual delivery in the same circumstances.

By mercantile custom, a bill of lading has become a symbol of the right of property in the goods.
Its possession is equivalent to possession of the goods themselves, and its transfer has the same
effect as an actual delivery.

Presentation of bill of lading

Arising from this function, it has been held that a carrier and his agent who delivers cargo
without presentation of the original bill of lading is liable for the value of the goods to the
actual goods owner, even if delivery is made to the named consignee.

Carriers who release goods without the surrender of the original bill of lading will often obtain
an indemnity from the person demanding release to protect against claims from the actual goods
owner.

QUESTION OF THE WEEK: What Is The Difference Between Harbour, Port, Terminal, Berth, Quay, Pier, Jetty?