The National Inland Waterways Authority (NIWA) has confirmed one death while 16 passengers were rescued when an Ikorodu bound boat capsized shortly after it departed CMS Ferry Terminal at 4.35 p.m. 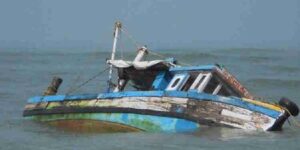 The NIWA, Lagos Area Manager, Mrs Sarat Braimah, made the disclosure in a statement made available to newsmen in Lagos on Monday.

Braimah said that the boat was involved in an accident 15 minutes after it left the CMS terminal.

“A 17-passenger boat named “TEMI 3 Global” which departed from CMS Ferry Terminal at 4:35p:m enroute Ikorodu Ferry Terminal on Sept. 27, was involved in an accident.

“Fifteen minutes into the journey near Adekunle Waterfront, the boat hit an underwater obstacle which broke the hull of the boat and this resulted to the capsize of the boat.

Read Also:  Ex-CRFFN Chairman Recants, Says I Was Appointed As Board Member Not Chairman

“Also the Marine Police, fishermen and other boat operators leading to the rescue of 16 persons alive while one person died while on the way to the hospital.

“We sincerely condole with the family of the deceased and pray for the soul of the dead to rest in perfect peace,”.

The South West Public Relations Officer of the National Emergency Management Agency (NEMA), Mr Ibrahim Farinloye, also confirmed the incident in an interview with the News Agency of Nigeria (NAN).

He said that the passengers were rescued with the support of local divers immediately the incident happened.

The local divers were trained by the Lagos State Government.