Just ten months after the alleged massacre of seven Indonesian sailors in Port-Louis’ roadstead, the Mauritius’ police have a new homicide linked to the maritime world to investigate. 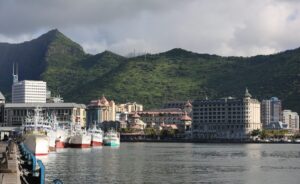 Last Monday, they arrested the chief cook of the Meghna Liberty, a Bangladeshi-flagged bulk carrier, for having killed the captain, a fellow Filipino like himself. He stabbed the captain 45 times in the chest and neck with a kitchen knife. The gruesome murder happened late in the night on November 20, off the coast of the Saint-Brandon, also known as the Cargados Carajos reefs, an archipelago located 430 km northeast of Indian Ocean’s island nation.

The 55,907-ton vessel, which left Saldanha’ port, in South Africa, was en route to Haldia, India, with 20 crew members, all of whom are of Filipino origin. Alfred Kenneth Calopez Banghanoy, the chief cook, killed Captain Baquillos Solante in his cabin. He confessed to his crew mates a few hours later by telling them : “It’s done”. They alerted the ship-owner after the discovery of the captain’s corpse in a pool of blood. The local shipping agent reported the murder to the police.

The crew members have already been interrogated after a health check due to Covid-19. The first officer stated that he had to cut the door to the captain’s cabin with a grinder. He gave the investigators a video shot on a cell phone showing how this has been done. As for the Chief cook, he blamed the captain for not giving him his cigarette ration and for making him work too much. They had been arguing since they were at sea on November 11.

A new captain and a new chef will have to fly to Mauritius before the Meghna Liberty can get the green light to leave Port Louis. This case comes as the criminal police await the decision of the Director of Public Prosecutions (DPP), the equivalent of the public prosecutor, on its investigation into the alleged massacre of six Indonesian seafarers on the Taiwanese trawler Weifa and one of their compatriots working on the Taiwanese trawler Eehai on the night of Friday 26 February last. The Vietnamese captain of the first trawler reported the disappearance of his men only on Friday, March 12.

The two trawlers had been asked to stay at the entrance of Port-Louis as part of a quarantine process when the drama unfolded. Searches carried out at sea yielded nothing. In the absence of bodies, evidence of any homicide and confessions, the case should be treated as a simple case of disappearance and the crew members should be released. Forensic experts subjected the Weifa to the BlueStar process in order to detect possible traces of a blood bath, but the boat had already been washed by sea water.

This type of crime in the region is not new. On February 20, 2019, a Filipino sailor killed two of his comrades and forced six others into the ocean – who were never found – while the Weng Peng, a Taiwanese trawler, was 1,500 nautical miles from Mauritius. The man was arrested by the Taiwanese coast guard. Twenty-two years ago, as riots erupted in Mauritius following the death of singer Kaya in police custody, the Taiwanese trawler Ching Ching No. 12 arrived in Port Louis harbor with fifteen crew members missing.

Read Also:  What Do We Know About the Omicron Variant So Far?

Captain Kung Tai-an of the Ching killed twelve sailors with his special caliber Magnum while under the influence of alcohol. He also forced three others to jump into the water while cruising 600 nautical miles from Mauritius. Sentenced to 20 years in prison by the Mauritian justice system, he was sent back to Taiwan a few years later to serve his sentence. Captain Teng Tung Yu of the Jiu Ying was also arrested by Mauritian investigators after arriving in Port Louis after torturing and killing two sailors while the Taiwanese trawler was returning from a fishing trip off the Falkland Islands.

In July 2002, Pan Ming Kuang, the captain of the Chi Man, his brother who is the engineer and two fishermen were beaten and thrown overboard from the Taiwanese’ long liner off the Seychelles. Upon arrival in Port Louis ten days later, the sailors, Ling Ben Cai and Liu Chong, were charged for homicide. Two years later, it was the turn of Captain Hung Tsau Hui of the Bahari Kencana No. 68 to have his throat slit in his cabin whilst in Mauritian waters.

Two Chinese sailors, Zao Kun Lin, 28 years old and Zao Ming Ku, 31 years old, were then denounced by two of their Filipino colleagues. According to witnesses – the only ones to have come forward out of the twenty-four members of the crew of Chinese, Indonesian, Filipino and Vietnamese origin – the two suspects had sufficient motives to kill the captain, the only Taiwanese on board.