In its August 2018, Editorial Opinion this newspaper noted that piracy reports indicated that Nigerian pirates accounted for all the 35 kidnapping of seafarers in the Gulf of Guinea in the first half of that year. The report added that, Nigeria remains as the world’s epicentre for piracy activity. 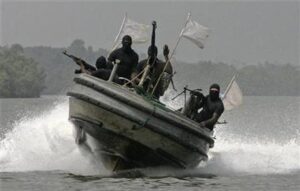 The Editors of this newspaper relied on the report of EOS Risk; a UK-based security assessment group, which also narrowed the source of attacks to two Niger Delta states of Rivers and Bayelsa. The body said: “From January through June 2018, EOS recorded 34 Nigerian pirate attacks on merchant and fishing vessels in the Gulf of Guinea? These attacks resulted in the kidnap of 35 seafarers for ransom and the hijacking of several vessels”

“Most concerning this year has been the resurgence of ‘petro-piracy’, involving the hijacking of tankers for oil theft,” said Jake Longworth, senior intelligence analyst at EOS Risk. “The return of petro -piracy has been accompanied by an associated increase in the geographical reach of Nigerian pirate gangs, leading to attacks in the waters of Benin and Ghana.”

By January of the following year, this newspaper again reviewed Nigeria’s rating in global piracy. The verdict again, was negative.

Our position was again reinforced by the December 2018 report of BIMCO; a global body of top players in global shipping which had raised alarm over for what it called a spike in piracy in the Gulf of Guinea, where Nigeria is a dominant player. It noted that, about 40 ships had been attacked in the Gulf of Guinea in the past 12 months.

BIMCO’s alarm coincided with the fact that, Nigeria had already witnessed attacks so early in that year.

We recall that, six seafarers had been kidnapped from the MSC Mandy, which was on the way to Lagos, Nigeria. Apart from this, armed robbers had also attacked two tankers off the coast of Nigeria on January 7 of the same year.

Not done yet, the IMB added that incidents in the Gulf of Guinea are particularly dangerous as over 80% of attackers were armed with guns, according to the latest IMB figures. All three vessel hijackings and nine of the 11 vessels fired upon in 2020 related to this region. Crew kidnappings were reported in 25% of vessel attacks in the Gulf of Guinea – more than any other region in the world.

The furthest crew kidnapping in 2020 occurred almost 200 nautical miles (NM) from land with the average kidnapping incident taking place over 60NM from land.

We can attest to the fact that 2020 was indeed a terrible year for the Gulf of Guinea and indeed for Nigeria as the leading nation within that region.

For Nigeria, year 2020 started and ended with piracy, crew kidnapping and ransom taking!

Year-on-Year, reports of piracy attacks in Nigeria and the Gulf of Guinea issued had been damning enough to cause anxiety among agencies of government that are responsible for taming the attacks.

So, when penultimate week, the same IMB, which had every year red-flagged Nigeria and the Gulf of Guinea for notoriety, broke the good news that Nigeria has exited the ignoble comity of piracy-prone nations, it was indeed cheering.

Instructively, the IMB noted in the report that, “most notably, Nigeria only reported four incidents in the first nine months of 2021, in comparison to 17 in 2020 and 41 in 2018”. It added that, so far this year, only one crew member has been kidnapped in Nigeria.

Most notably, “Nigeria only reported four incidents in the first nine months of 2021, in comparison to 17 in 2020 and 41 in 2018. Crew kidnappings in the region have dropped with only one crew member kidnapped in Q3 2021, compared to 31 crew members taken in five separate incidents during Q3 2020. All Q3 incidents in 2021 were also against vessels at port anchorages whilst the average successful kidnapping location in Q3 2020 was approximately 100NM from land”, the report noted

On the face value, this verdict from IMB should have called for celebrations. While some stakeholders have been falling over themselves to congratulate Nigeria on the feat, our position is that, it is not yet Uhuru.

Raed Also:  What do you think is responsible for the drop of piracy at the Gulf of Guinea as reported by the IMB?

Yes, credit should be given to NIMASA for the Deep Blue assets, which comprises several components of highly sophisticated equipment, among which are (SMHs). These helicopters are equipped to carry out different kinds of operations, including search and rescue, as well as special operations that may be needed as situations require to guarantee round-the-clock security and safety of Nigeria’s waterways through enforcement of the relevant laws. The SMHs capability in the areas of security surveillance, as well as search and rescue, would make it possible for Nigeria to meet International Maritime Organization’s (IMO) requirement for maritime administration.

While the Deep Blue Assets that NIMASA may have assisted significantly in pushing pirates away, there are indications that the miscreants may have withdrawn back to the brown waters.

The fact is that, NIMASA has a statutory responsibility to keep Nigeria’s waters (especially the country’s exclusive economic zone) safe and secure. But the back waters are its responsibilities too.

There are reports of escalating sea robbery in the Niger Delta, especially in Rivers and Bayelsa. As recent as last week, the Bayelsa government imposed a dusk-to-dawn curfew on its waterways. The state also announced a ban on the use of 200-hp speed boats.

Maritime security experts have submitted that, piracy attacks are seasonal and that, following global trend, there should be a spike at this time of the year, rather than a decline.

This also buttresses our fears that, NIMASA and its partners, especially the Navy should not go to sleep. Pirates are probably on a recess or have found a more lucrative venture.