Plans to expand the Maasvlakte II terminal in Rotterdam have been put on hold indefinitely, The Loadstar understands. 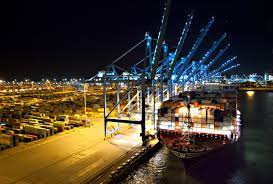 Sources with close ties to Rotterdam claim operator AP Møller-Maersk Terminals (APMT) has decided not to push ahead with its plans.

Inland consultant Gunther Ginckels told The Loadstar: “Deciding to postpone the expansion was very much an economic move. The costs of labour and materials have been pushed way beyond expectations, and moving ahead with the expansion would have taken the project way beyond budget.”

The final decision on doubling Maasvlakte II’s capacity was expected in June, and with the expansion now in doubt, concerns have arisen over long-term capacity issues.

Shippers on both deepsea and inland trades have struggled with delays and congestion over the past 18 months, which Mr Ginckels and others put down to the ports sector failing to anticipate, and adapt to, accommodating the influx of ULCVs.

“We are seeing ships built like never before, but this doesn’t mean ports have the infrastructure to accommodate these bigger vessels,” added Mr Ginckels.

“They can handle more containers, but the ports were simply not built for such big ships, and without changes to the infrastructure they will get caught in bottlenecks, because berth capacity is way less than these ships require.”

APMT has had authorisation to expand the site since it began operating it in 2015, and last year Hochtief, Ballast Nedam and Van Oord were contracted for the work.

Alongside doubling capacity from 2.7m teu to 5.4m teu, the project, forecast for completion by 2026, was expected to add additional berth space for ULCVs. Now, with the surging steel prices, it has been suggested the costs have risen by “hundreds of millions”.

One source somewhat cynically suggested that by carriers the decision would be “well-received”, as they had shown they “can excessively profit from capacity disruption”.

“The same is also true of the terminals, as they also benefit from disrupted logistics chains and, while they hold primary responsibility for these disruptions, it is the cargo owners and ultimate customers that pay,” added the source.