Carriers are increasingly skipping port calls in an effort to meet schedules amid port congestion and delays, despite schedule reliability sitting at record lows. 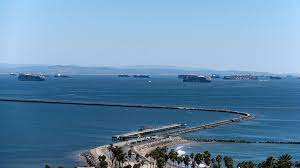 A survey by Alphaliner of recent voyages on a number of trade lanes found that even when ports were omitted from loops, the majority of ships were still missing their scheduled arrival times.

The problems extend further than the high-profile chaos at Long Beach and Los Angeles, which yesterday saw a new record of 81 ships waiting at anchor or drifting offshore awaiting berths.

And it is not just head haul voyages that are running late. Alphaliner noted that of 17 boxships that returned to China during week 45 following voyages to northern Europe, only one arrived back on time for its next scheduled voyage, and even this was only possible after it skipped calls at Yantian and Tianjin.

On average, the arrival delay of the 17 vessels tracked was 17 days, Alphaliner said.

The transatlantic trade was also suffering from congestion at both European and US east coast ports.

“Only one of the nine ships returning to the Benelux area in week 45 after a full round trip between northern Europe and the US east coast completed its voyage within the five weeks stated in the pro forma schedule,” Alphaliner said.

But this was only possible because the ship in question had skipped a call at Newark and wasn’t scheduled to call at heavily congested Savannah, where waiting times are up to eight days.

“Omitting ports has become the best way for carriers to reduce delays, but it has significant consequences for those customers shipping via these ports and for carriers that might need to organise transhipments,” Alphaliner said.

“The multiple port omissions make it very difficult to measure the reliability of liner services. Carriers are also trying to fill gaps in the schedule by organising extra sailings.”

The average delay across the global fleet was over a week, it said.

Alphaliner said the worst performing ship it tracked was the 14,026 teu One Blue Jay (IMO: 9741372), which operates on a pendulum service between the US west coast, Asia and northern Europe. The last full round of its scheduled 126-day rotation took 171 days when it did not skip any of its planned ports but arrived six weeks late.