A 40ft container on Thursday fell on a commercial vehicle at the Cele bus stop along the Oshodi-Apapa Expressway, Lagos State. 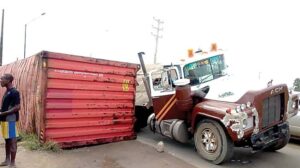 Even though there was no confirmation, passengers in the bus were trapped, leading to fears that many passengers may have been killed.

However, it was gathered that the driver of one of the popular yellow commercial buses died immediately, while two others managed to escape.

Meanwhile, the Lagos State Traffic Management Authority (LASTMA) while confirming the incident on Thursday afternoon, said the accident happened on the main carriageway opposite a filling station, inward Cele from Oshodi.

“It involved an upturned 40ft container on a commercial bus.

“Police officers from Ilasa division are on the ground doing the needful and also effort is on for recovery,” the agency wrote on its official Facebook page.