Chinese Shipbuilders See Slowing of Orders Amidst COVID Impact in 2022

China’s shipbuilding industry is showing significant signs of a slowdown, in part has been hard hit by the latest waves of the pandemic which delayed the production schedule for a broad range of ships. While the yards and specifically the industry centered around Shanghai are emphasizing their return to operations in recent weeks, the first four months of 2022 showed a marked slowdown in activity. 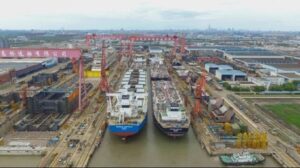 Data from the China Association of the National Shipbuilding Industry (CANSI) illustrated the scope of the impact of COVID-19 on the shipbuilding industry in 2022. For the first four months of the year, the total output by the shipbuilding industry of 11.71 million dwt was down nearly nine percent versus a year ago. Domestic volumes appear to be stronger as CANSI reports that exports were down nearly 15 percent to 10.28 million dwt.

Exports or orders of ships for international shipowners however continue to make up the vast majority of the business at Chinese shipyards. The data highlights that nearly 90 percent of the volume from the shipyards in the first four months of 2022 was for export. Also, reflecting the rising costs and high prices for ships they reported that the value of the export ships topped $5.8 billion and while it was off by more than 10 percent it was a smaller decline than the volume of export tonnage.

Global newbuilding orders from shipowners are also declining from last year’s peak. CANSI reported that the Chinese shipbuilding industry received orders for 15.39 million dwt, which was down nearly 45 percent year over year. Most of the decline was coming from international shipowners with export orders for the Chinese shipbuilders down nearly 45 percent in the first four months of 2022. Despite the drop from 2021’s record levels, so far in 2022, China added another 13.66 million dwt in export ship orders.

The shipyards are reporting that they are working hard and quickly moving back to full capacity after having been closed for most of April and into May. China Shipbuilding’s Hudong-Zhonghua shipyard was able to proceed with work for most of May, reporting that it passed milestones for six ships in the first part of the month. This included sea trials for an 80,000 cbm LNG carrier, starting the engine for a new 13,000 TEU containership, moving Evergreen’s second 24,000 TEU containership out of the dry dock, and starting final assembly work on another LNG carrier.

Similarly, just a week after restarting operations, the Jiangnan Shipyard was able to deliver an LNG dual-fuel Newcastlemax bulk carrier to EPS, while another Newcastlemax bulk carrier and an Aframax crude oil tanker each achieved milestones in their construction last week. Two other vessels were also repositioned in the dry dock for the next phase of construction with the shipbuilder located near Shanghai vowing to make up for lost time and complete its project on time.

While the industry has been impacted by COVID-19 and the global slowing in orders, the Chinese shipbuilders continue to have a large orderbook. As of the end of April, a total of 102.47 million dwt was on order up more than 20 percent versus 2021. Export ports make up 89 percent of the total orderbook.

Chinese shipbuilding remains the largest segment of the global industry winning 54 percent of the new orders in 2022. China’s backlog accounts for just under half the total market volume for new ships.