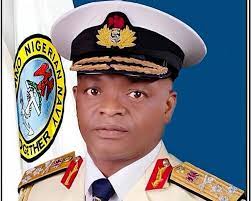 Gambo said this during the return of NNS KADA and the ship’s company to NNS BEECROFT’s jetty at Apapa in Lagos, after 17 days at sea.

The NNS KADA set sail for Guinea Bissau on Aug. 6.

The CNS commended them for their efforts, saying he was particularly impressed there were no negative reports bordering on issues of indiscipline during the mission.

“The national assignment you went for is based on the ECOWAS protocols and I commend the manner in which you honourably discharged your duties.

Read Also:  Shipping Back To Normal Off Somali Coast As Piracy Dips

“You have assisted the primary and strategic capacity of sealift to emplace the Nigerian contingent in the ECOWAS stabilising force in Guinea Bissau,” Gambo said.

According to him, other participating countries used other forms of transportation such as air and road to emplace their military hardware.

“However, the Nigerian Navy used it’s sealift capability to emplace our contingent making us the only nation within the sub-region to do this.

“The mission has foreign relation imperative and dividends and this projects the Nigerian Navy’s capacity and capability in the West African sub region,” Gambo added.