Collapsed E-Call Up System: It Takes 14 Days To Get To Lagos Port From Ijora – Truckers

· We pay about N60, 000 as bribe at various illegal checkpoints

Following the collapse of the electronic call up system that was introduced by the Nigerian Port Authority (NPA), truck drivers are lamenting how long it takes their trucks from their various approved garages down to Truck Transit Park (TTP) at Ijora and from there to Apapa port. 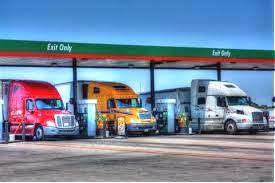 The truck drivers in a chat with our correspondents last week, lamented that they now spend an average of 14 days, between the garages and the terminals in Apapa port, while they part away with about N60, 000 to security operatives at the various checkpoints before they can access the port.

They also confirmed that some truck drivers now get to the NPA gate of Apapa and Tin Can Island ports without the mandatory electronic tickets, by paying huge bribes to those in charge of the e- call up system.

The truck drivers informed that many of their colleagues no longer use the designated garages, but prefer to pay their way through to the port.

Confirming the allegations, when our one of our reporters visited Apapa port last week, he discovered that several garages and parks approved by NPA for truck drivers to park their vehicles before accessing the port had been abandoned.

Fielding questions from our reporter, a truck driver; Mr Olalekan Hamzat said he spent an average 14 days cumulatively from one of the approved garages at Orile to Lagos Port and pay about N60,000 to various security operatives at the various checks points that lead to the port gates.

Another truck driver, who just identified himself as Oseni, told Shipping Position Daily that using the ETO app is tantamount to a waste of time, stating that he had only use the eto app twice since it was launched

“Eto is not working at all. I have only used the app two times. All the Police and LASTMA people are everywhere only collecting money. Only drivers that pay them can pass into the port. Everything has failed.

“To enter the port is not about ETO, it’s about money. You pay Police and LASTMA and you enter the port. They are just deceiving us

However, one of the truck drivers who also spoke to our correspondent last week at the Tin Can Island port, informed our correspondent that LASTMA last week Monday impounded 10 trucks for flouting the e- call up system, he said the trucks were arrested for parking indiscriminately on the road and that the recent directive of the Lagos state government led to the arrest of some of the trucks.

He said that the deviance being displaced by many of the truck drivers is because they have lost hope in the eto call up system of the NPA.

A top member of the Council of Maritime Truck Union (COMTUA); Mr Leye Thompson, had about two weeks ago in a chat with Shipping Position Daily, had also alleged that, staff of TTP are the ones selling tags to trucks that did not pass through the eto platform.

“You won’t believe that it is the TTP staff that are selling tags to people that followed illegal routes. They will collect details of your truck, go inside the terminal to go and print it out and give it to you. And when you get to the port, they are still the same people at the port that will collect N30,000 from you and they will open the gate for you to go in”, he lamented.

He said further that, “every other people that have genuine document through the normal process, cannot go in”, even as he alleged that there is high level of forgery of the electronic tickets with the collusion of officials of TTP and those he called ‘movers’, who help to collate the number of people who have trucks to access the port illegally.

He cited an instance when the Chief Operating Officer of TTP was confronted with facts about the involvement of employees of the company in the illegality of moving trucks into the port. He said the TTP boss denied any such possibility, until he was confronted with evidence.

According to him, the TTP staff use the remote control in their pockets to create access for trucks that do not have the e-tickets.