The Council of Maritime Transport Union and Association (COMTUA) has called for the unbundling of the Nigerian Ports Authority (NPA) electronic call-up system popularly called Eto, to help curb extortion along the port corridor. 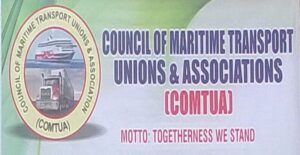 Speaking on Thursday during the maiden edition of the 2021 Delegate Convention of COMTUA, President of the association Mr. Olaleye Thompson informed that having another company with the responsibility to handle the Tin-Can section of the ports while the Trucks Transit Park (TTP), operators of the Eto focuses on Apapa, will help reduce the issue of extortion and other vices affecting the efficiency of the e-call-up

The convention had the theme,”Resolving the Challenges of Cargoes and Haulage Movements in Nigeria for Effective Domestication of the African Continental Free Trade Agreement (AfCFTA) and Promoting the Ease of Doing Business in the Continent”.

Thompson, while speaking on the recent exit of the National Association of Road Transport Owners (NARTO) and the Maritime Workers Union of Nigeria (MWUN) alleged that the two associations pulled out over selfish reasons.

According to him, “two of the initial founding members of COMTUA have pulled out over selfish decisions. These two groups decided to leave COMTUA because we agreed that no association should be collecting money along the ports access roads again.

“The aggrieved groups, the Maritime Workers Union of Nigeria (MWUN) and the Nigerian Association of Road Transport Owners (NARTO) rejected our decision to stop the collection of money along the ports access roads. They said it is a major means through which they get revenue to fund their operations. After fruitless efforts to make them see reason, they have left COMTUA and as I speak to you, their members are on the roads between Mile 2 and Tin-Can, collecting money from truckers”

“However, three new associations have joined COMTUA. We have Logistics Practitioners Association of Nigeria (LPAN), Young Truck Owners Association and the entire corporate bodies of truckers which includes Dangote, BUA, Flourmills amongst others”.

Speaking on the e call up, Thompson said: “The issue of extortion along the ports access roads is a major reason why the NPA E-call-up system needs to be unbundled.

“It seems the entire space is too big for the E-call-up manager, the TTP to manage. If another company is allowed to handle Tin-Can, while TTP focuses on Apapa, the issue of extortion and other discrepancies won’t exist.

“If there is competition, the managers of the TTP will deliver in a better way. Imagine, from Mile 2 down to Tin-Can, there is nothing like a central control system where anybody is checking truckers’ documents or papers. Rather, what you will see are illegal checkpoints mounted by some associations that have pulled out of the COMTUA, collecting different monies from port users.

“If Eto is unbundled, there will be competition. The traffic managers will perform more effectively. Currently, the entire port area seems to be too big for just one company to handle.” he said

Speaking earlier, former Dean School of Transport, Lagos State University (LASU) Professor Odewumi Samuel also backed the call that Eto should be unbundled informing that there is need to break the monopoly of the handlers at the port, he stressed that lack of political will on the part of government has led to the issue of extortion at the port.

In his words: “They need to break the monopoly of eto, let them have two or three so that the truckers will have options of which of them to approach, so as to increase capacity

“I hate to believe that the problem is not solvable, it is because those who are benefiting are more powerful and the problem of corruption is a self feeding thing once you allow it to feed it will get big and strong and find it difficult to break”.

While giving her remarks the President Corporate Fleet Owners Association, Mrs Folake George urged that truckers’ associations should come under one umbrella, stating that over the years government has been playing the divide and rule game which has negatively affected the union.

“If we can come together under one umbrella we will be able to resolve many of the issues that we have, government have been playing the divide and rule game which is not helping us” she stated.

The association also had an election where new officers emerged. Mr Adeyinka Aroyewun emerged as the new President of COMTUA; Alhaji Tajudeen Baruwa, Co-chairman, Board of Trustee; and Chief Ekene Ikeji, BOT Secretary.