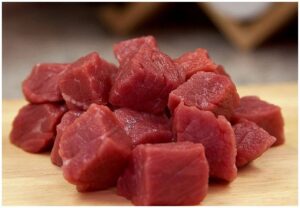 He warned that the consumption of undercooked meat is unhealthy and could cause tuberculosis.

Bolajoko, who is the Head of the Veterinary Public Health & Preventive Medicine Division at the institute, said tuberculosis could be transferred from animals to humans through meat if it is contaminated and not properly cooked.

The assistant director disclosed this during an interview with PUNCH HealthWise.

Banjoko said some parasitic and bacterial diseases could also be transmitted from animal to human if the meat was not properly inspected.

The veterinary doctor stated that meat and animal products processed in abattoirs with poor hygiene practices were usually contaminated.

The expert says cows and many other animals can harbor bovine tuberculosis, a disease caused by infection with Mycobacterium bovis — a close relative of the bacteria that cause human tuberculosis.

Like human TB, experts say, it mainly affects the airways and lungs. The bovine TB bacteria can infect humans and cause TB, with symptoms that can include fever, night sweats, persistent cough, diarrhoea, weight loss, and abdominal pain

According to the World Health Organisation, worldwide, tuberculosis is one of the top 10 causes of death and the leading cause of a single infectious agent (above HIV/AIDS).

Banjoko explained, “People should only eat meat that has been certified fit for consumption and prepared in a hygienic condition.

“People can acquire tuberculosis by consuming such meat if it is not properly prepared or cooked.”

The veterinary specialist warned that human traffic could contaminate meat and make it unsafe for consumption during processing at the abattoir.

“In a situation where you have traffic of humans moving in and out of the abattoir, those that have a common cold and COVID-19 can contaminate meat that is exposed.

According to him, any kind of disease can occur in an unhygienic slaughterhouse either from the animals that have been slaughtered or humans moving around and even from the environment.

He advised people to always cook their meat properly before consumption.

PMC is the biomedical and life sciences journal literature at the United States National Institutes of Health’s National Library of Medicine.

According to them, these strategies are crucial to the successful prevention and control of the spread of zoonotic diseases, including tuberculosis.

The Chief Executive Officer of the Institute of Human Virology Nigeria, Dr. Patrick Dakum, in 2021, said Nigeria ranks in the sixth position among 30 tuberculosis high burden countries in the world.

Inadequate investment and funding for TB control in Africa according to the global health body is jeopardising the efforts to meet the global target of ending the disease by 2030, while the COVID-19 pandemic threatens to roll back progress made so far on the continent.