The Ever Given container vessel is all set to cross the Suez Canal again, for the first time in 4 months after running aground and hampering the global shipping network for almost a week. 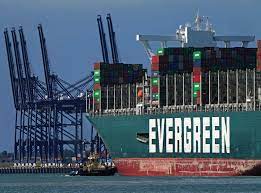 The vessel is currently stationed near the Borg al-Arab area and is expected to reach Port Said on Thursday. This time it is all prepared to cross the tunnel smoothly.

The Ever Given ship is humongous and bigger in size than the Titanic and longer than the Empire State building. It obstructed traffic in the Suez Canal for almost a week and finally got free after the salvage crew of region rescued it.

During this time, negotiations occurred with the ship’s owner regarding the compensation claims. The ship was released in July, after both the parties reached an agreement in July, four months after the incident.

The shipowner replaced the captain after the accident to complete its voyage. Ever-Given finally arrived at Felixstow port in Suffolk, UK on 4th August, after a delay of 4 months.