The British Royal Navy has confirmed a Coronavirus outbreak on its flagship, HMS Queen Elizabeth.

The aircraft carrier was about a quarter of the way through a 28-week deployment leading the Carrier Strike Group (CSG), which included a U.S. destroyer and 10 Marine Corps F35-B fighters. 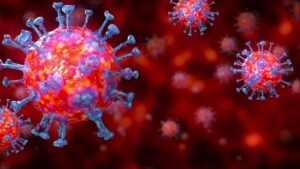 It is currently in the Indo-Pacific as part of a world tour of some 40 countries.

This was HMS Queen Elizabeth’s first tour since setting sail in May.

A Royal Navy spokesman said in a statement, “As part of routine testing, a small number of crew from the Carrier Strike Group have tested positive for COVID-19.

“All personnel deployed in the UK CSG have received both doses of the COVID vaccine and there are a number of mitigation measures on board including masks, social distancing and a track and trace system.

“The Carrier Strike Group will continue to deliver their operational tasks and there are no effects on the deployment.’’

The confirmation came after Defence Secretary Ben Wallace on Tuesday pointed to the deployment as an example of the way British and U.S. militaries were able to operate “seamlessly’’ together.