Customs Clears 4,438 Trucks Of Goods In Seme In 5 Months – Official

The Nigeria Customs Service, Seme Border Area Command, says it has cleared 4,438 trucks with various goods since the reopening of land borders by the Federal Government on December 16, 2020. 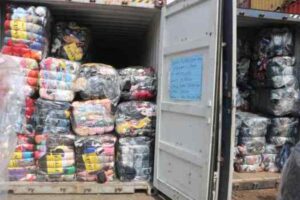 Public Relations Officer of the command, Mr Abdulahi Hussiain said this in a statement in Seme, Lagos, on Saturday.

He said out of the 4,438 trucks, the command processed 1,059 trucks under the ECOWAS Trade Liberalisation Scheme (ETLS), while 2,487 trucks were exports.

Hussiain said the Seme Customs Area Comptroller, Mr Bello Jibo, said the command had intercepted contraband with Duty Paid Value (DPV) of N409.8 million since the reopening of the border.

The controller said the banned substances were smuggled from Dec. 17, 2020 when the Federal Government announced the reopening of four land borders to date.

“The attention of the command has been drawn to a misleading narrative in some quarters of the public that the Seme-Krake border has not been fully reopened, thereby limiting seamless inflow and outflow of legitimate goods.

“It is pertinent to state that since the reopening of some land borders by the Federal Government on Dec. 16, 2020, with Seme Border command being among the four borders reopened, its operation has since been sustained on a full scale.

“Although some initial hitches were encountered by our Nigerian importers concerning high charges of fees and levies imposed on the Nigeria bound goods before entry,” he said.

He said the command made a revenue of N431. 1 million while the sum of N409.8 million was realised as DPV from seizures from January to date.

According to him, the achievements are indications that the border is not only open, but fully operational.

“The command will continue to actualise sustainable campaign and provision of necessary instruments with a view to facilitating legitimate businesses in line with extant government fiscal policies,” he said.