The Nigeria Customs Service (NCS), says it has collected N1.293 trillion in the first six months of 2022 into the Federation Account. 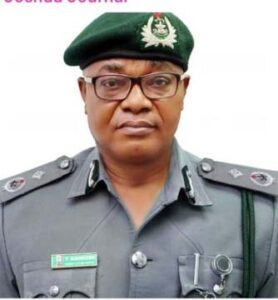 The NCS Public Relations Officer, Deputy Comptroller Timi Bomodi said this at a news conference on Friday in Abuja.

He said the amount was an increase compared to N1.004 trillion generated for the corresponding period in 2021.

According to him, the amount generated in 2022 surpassed the service’s achievements for 2021 by N48 billion accounting for 28.8 per cent.

He said the revenue generation was remarkable, given the fact that only 116, 691 Pre-Arrival Assessment Reports (PAARs) were issued against 129, 667 processed within same period of 2021.

“It gives me great pleasure to welcome you to the Headquarters of the Nigeria Customs Service for unveiling of our half year score card.

“It comprehensively captures our activities for the period from January to June 2022.

“As it has become customary, the service remains focused and steadfast in its commitment to meeting the challenges of the moment.

“It is fully confident in its ability to innovate and adapt to a dynamic socio-economic environment,” he said.

Bomodi said that the sum of N156 billion was also generated into the non-federation account as collections on behalf of other government agencies.

While giving a breakdown of the amount generated within the period under review, the PRO said it was generated from excise, free trade zones and industrial incentives, and anti-smuggling among others.

On excise, free trade zones and industrial incentives, Bomodi said excise duty was tax levied on the manufacture, sale and consumption of goods under excise control.

He said it was collected through 22 commands of the Service.

“In the month of June, the service began collections from extant traders producing carbonated and sugary drinks newly added under schedule five of the CET.

“So far, the service has collected more than one billion Naira from carbonated and sugary drinks in the month of June.

“Other revenues from telecommunication, like call and data and digital network services are yet to be collected.

“The service is expected to start collecting revenue on these products and services as soon as the modalities for collection are put in place.

“Duties from these revenue sources are expected to boost our collections in the current year,” he said.

He said that in addition to providing employment opportunities for Nigerians, the special economic zones were expected to engender transfer of technology, and building of local capacity among others.

On enforcement and anti-smuggling, Bomodi said in the period under review various goods with a total Duty Paid Value (DPV) of N39 billion were seized due to policy infringements.

Bomodi said the DPV value of seizures in the current year exceeded the ones made in 2021 by N34.8 billion.

On other efforts made by the service in the area of illegal wildlife trafficking and trade, Bomodi said the service had collaborated with the United States Embassy in Nigeria.

The PRO said the collaboration had seen to the arrest of 12 foreign and local suspects, confiscation of 1, 236.5 kilogramme of pangolin scales and 145 kg of ivory.

According to Bomodi, all suspects have been charged to court and are awaiting conviction.

He said that seven persons were arrested in violation of the Anti-Money laundering Act and were handed over to the Economic and Financial Crimes Commission (EFCC).

On staff training and welfare, he said officers had continued to upgrade their skills through refresher courses at the various training colleges and at the Command and Staff College among others.

He said the trainings were designed to equip them with the knowledge and know-how to function efficiently in a 21st century Customs administration.

“As we approach an era of 100 per cent automation of all our services, we are mindful of the quality of training needed to manage both the transition and the sophisticated technological assets.

“The service has set out to improve on the living standards of its officers and men.

“To this effect, it has built new barracks and staff quarters across the four zones of the federation and provided bussing services”, the said.

Bomodi said that the service had acquired new and rugged vehicles capable of withstanding the rough terrain particularly in border areas.

“The service has continued to improve on its business processes through the introduction of innovative services that have simplified, harmonised and automated its core functions.

“One of the successes recorded so far is the VIN-Valuation protocol which uses the vehicle Identity number as a guide for the payment of appropriate taxes,” he said.

He listed other areas of achievement to include stakeholder engagement, deployment of scanners and recruitment.

He assured Nigerians that the service would focus on fortifying risk management tools to minimise leakages and curtail activities of non-compliant traders among other things.

“We understand the important role of technology in this endeavour, that is why our focus is on actualising full automation in the concession agreement.

“The agreement is vetted by Infrastructure Concession Regulation Commission (ICRC) and signed with Trade Modernisation Nigeria Limited and our technical partners Huawei Technologies Limited,” he said.

Bomodi said the agreement would transform operations of the service by taking it to the same level with leading customs administrations.