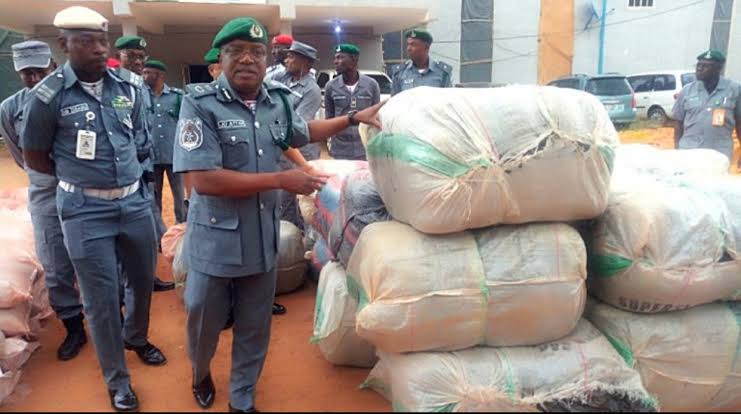 Kadejo said that the item was confiscated by a patrol team of the service.

“We have obtained necessary approval from the Comptroller-General of NCS, Retired Col. Hameed Ali and I hereby hand over the seized suspected marijuana to the Niger State Commander of NDLEA for further action,” he said.

Kadejo further stated that the item weighed 253.6kg, with an estimated street value of N20.605 million.

He decried a situation where some responsible citizens were working hard to build the country, while others were engaging themselves in acts inimical to the development of Nigeria.

“I am glad that due to the diligent application to duty, our officers were able to intercept these illicit packages.

“If the packages had escaped our eyes, they would have helped in the execution and sustenance of crimes, such as banditry, kidnapping, thuggery and other social vices,” he said.

The comptroller said that the service was making efforts to apprehend the fleeing owners of the contraband.

As the general elections draws near, he stressed the need for members of the public to report suspicious activities to security agencies in order to ensure credible polls.

Kadejo reiterated the service’s commitment to combating smuggling activities in the country and suppress them to the barest minimum.

Responding, the NDLEA Commander in the state, Mr Haruna Kwetishe, promised that the agency would go after suspected illicit drugs consumers, peddlers and barons in the state to ensure credible polls.

Kwetishe, who commended NCS for the seizure, added that NDLEA would ensure that the illicit drugs did not go back into the society again.

According to him, Nigeria is the project of all citizens and not that of the security agencies alone.

“Therefore all hands must be on deck to salvage our country,” he said.