Customs Hands Over 389 Parcel Of Marijuana To NDLEA In Kebbi

The Nigeria Customs Service (NCS) has handed over 389 seized parcel of cannabis sativa to the National Drug Law Enforcement Agency (NDLEA) in Kebbi. 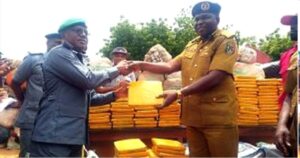 He said that the handover of the substances was in the spirit of inter-agency collaboration.

He noted that while other seizures had economic consequences, cannabis sativa portends grave security and health implications.

He expressed concern over the spate of collaborators aiding and abating crimes, adding the trend was the emerging challenges confronting anti-smuggling operatives in the state.

“Our intelligence revealed that many youths are turning to informing smugglers about movement of personnel to evade arrest as a means of livelihood.

“This action is in violation of Section 77 of Customs and Exercise Management Act (CEMA) Cap C45 LFN. 2004, which prescribes two years imprisonment and forfeiture of apparatus used in passing or signaling such information.

“Such unpatriotic act sabotage and frustrate officers’ efforts to effectively police and interdict improper bringing or taking out of items that might affect national economy and security,” he said.

According to him, the interventions by some traditional and community leaders has been yielding positive results.

While commending the community leaders for their support to the Service, Attah reiterated commitment to check illegal trans-border trade and other criminal activities in its area of operations.

Responding, Usman commended the existing synergy between the Service and the agency, adding it would promote security, reduce drug abuse and crimes in the state.

“The NCS has been doing great and this is not the first time, it has handed over seized items to NDLEA in the past, ” he said.