The Nigeria Customs Service (NCS), Seme Command, says it has intercepted 1,050 jerry cans (or about 30 litres each) of Premium Motor Spirit (PMS) known as petrol along Seme and Badagry creeks. 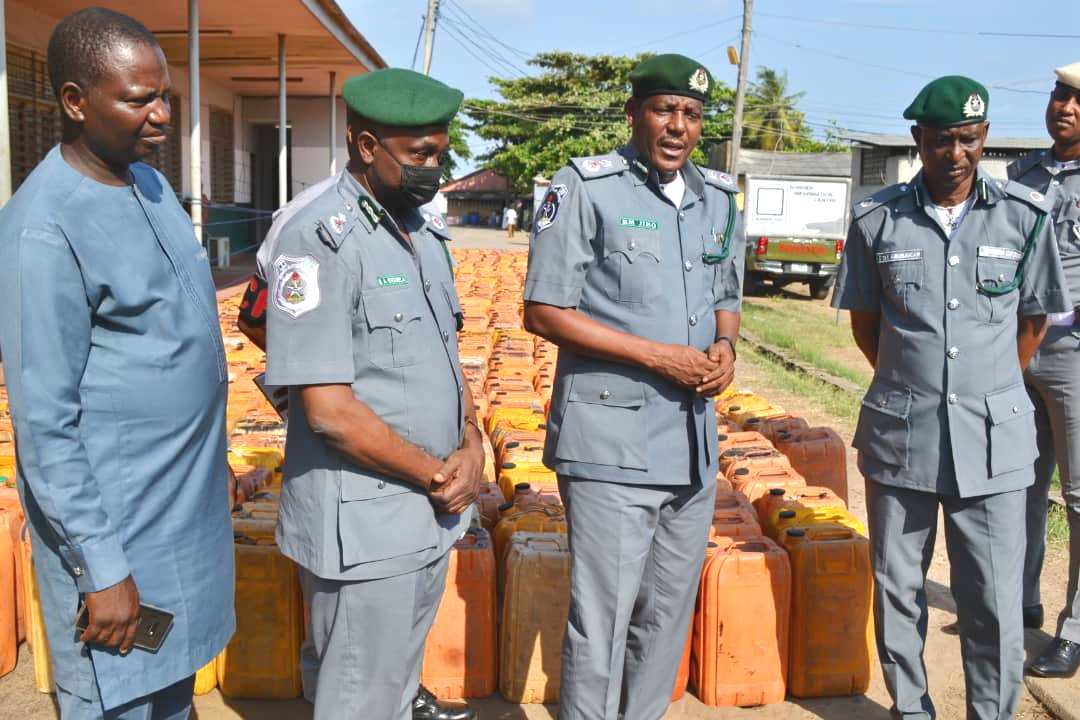 This is contained in a statement issued on Thursday in Seme, Badagry, Lagos State, by the spokesman of the command, Mr Hussain Abdullahi.

Abdullahi quoted the Customs Area Controller, Comptroller Bello Jibo, as saying the interception was made possible by the commitment of his men.

He said that they were committed in suppressing the activities of daredevil smugglers to the barest minimum.

The Controller of Seme Customs Area Command, Comptroller Bello Jibo and his men during the display of intercepted 1050 Jerry cans (30 litres) on Tuesday at Seme, Badagry.

Jibo said the officers and men intercepted large quantities of items in sacks along the creeks and beaches in the axis on Dec.1.

“The unfortunate scenario is that apart from sabotaging the efforts of Government that is paying huge amount of money to subsidise the products for the benefit of Nigerians, smuggling of petroleum also poses threats to their own lives and most times vehicles get burnt when accident occurs,” he said.

Jibo reiterated the commitment of officers and men of the Command to continue the fight against smuggling and other crimes with a higher tempo.

He commended Comptroller General of Customs, retired Col. Hameed Ibrahim Ali and the management team for providing logistics to support the Command.

According to him, the command received four Hilux vehicles to boost its operations.

He said that Customs would continue to enforce federal government policies with a view to suppress smuggling.

Jibo said they would also ensure collection of appropriate revenue and facilitation of legitimate trade.