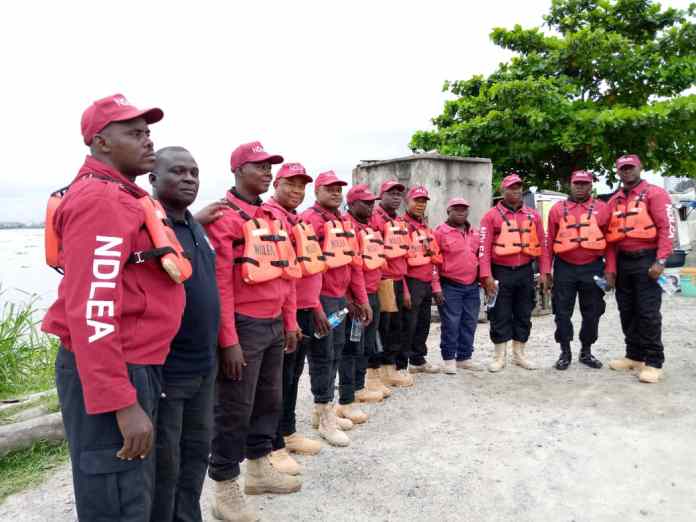 The WADA was officially launched by President Muhammadu Buhari in June with a mandate given to the Chairman and Chief Executive of NDLEA, Brig.- Gen. Buba Marwa to get rid of illicit drug in the country.

The Area Commander, Apapa Port Special Area, Assistant Commander – General of Narcotics (ACGN), Mr Bashir Gadzama, said at the launch on Thursday that the command embarked on the decoration and launch despite its busy operational activities.

Gadzama said,” This decoration ceremony is coming a little while after the release of promotion list some months ago.

“The is because the command has remained a beehive of operational activities as a result of the streak of landmark drug seizures at the port.

“This has left us with little or no time to hold the ceremony before now,” he said.

According to the Commander, 3, 506 personnel that cuts across all cadres wrote the promotion exams which the outcome lifted the personnel of Area.

“Out of this number, 54 members of this Special Area benefitted from the promotion exercise.

“This singular action came after years of career stagnation.

“This further rejuvenated vibrancy in the area where officers work round- the- clock , with results,” Gadzama said.

He, however, enjoined the promoted officers to sustain the new work spirit engendered by the promotion.

Speaking on WADA, he said the launch was to send appropriate signal to all actors in the illicit drug chain within port and its environments.

“ This area has been appropriately motivated and given the mandate to crush any attempt to try our will for drug – free Nigeria.

“WADA aimed at sensitising the general populace on the dangers and consequences of illicit drug use and trafficking,“ he said.

He further expressed profound gratitude to the area personnel and other sister agencies who played modest success of the command .

“The Chief Executive ensured the promotion of 75 per cent of the personnel, much is expected ,” Callys said .

Malanta said that custom would continually collaborate with NDLEA to achieve a drug – free Nigeria.

One of the new decorated officers, Narcotic Commander (NC) , Mrs Mercy Thompson, who spoke on behalf of the newly promoted personnel commended the chairman of the agency and promised that the personnel would perform maximally.