The Nigeria Customs Service (NCS), Oyo/Osun Area Command, says no fewer than 21 suspects were arrested, while 126 seizures of different contrabands were intercepted by the command in six months. 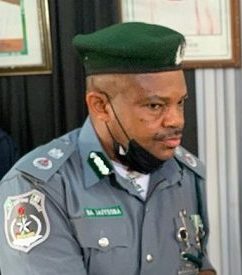 The command’s Area Controller, Comptroller Babajide Jaiyeoba, made this known on Wednesday in Ibadan, while briefing newsmen on the achievements made by the command between May 24 and Dec.14, 2022.

Jaiyeoba said that the total Duty Paid Value (DPV) of the seizured items was put at N192.2 million.

He said that the customs was waiting for approval to hand over the hemp to NDLEA, while the 69 sacks of dried donkey skin had been handed over to Nigeria Agricultural Quarantine Service (NAQS) along with two suspects and one means of conveyance.

The comptroller said that donkey was an endangered species and trading on it contravened Section 6 of the CET and Convention on International Trade on Endangered Species (CITES), which Nigeria was a signatory to.

Jaiyeoba said that the command had so far generated a total revenue of N65.5 billion between January and November, 2022.

He further said that the revenue generated in 2022 exceeded the N56.9 billion generated the same period in 2021 by N8.6 billion, representing 15.04 per cent increase.

Jaiyeoba said that the command had exceed its target revenue for the period of January to December, 2022 by N6.7 billion.

He said that the achievement was made possible by the command’s resolved to religiously enforce provisions of NCS extant laws aimed at facilitating legitimate trade.

Jaiyeoba said further that the timely sharing of credible intelligence and effective collaboration among all units of the service in Oyo and Osun Command, as well as synergy with other security agencies, made the achievement possible.

The comptroller assured all stakeholders with legitimate businesses with the commands area of responsibility of maximum cooperation.

He commended the NCS Comptroller-General, Retired Col. Hameed Ali and his management team, for their continue support in realisation of the service’s mandate and enhanced performance.Customs